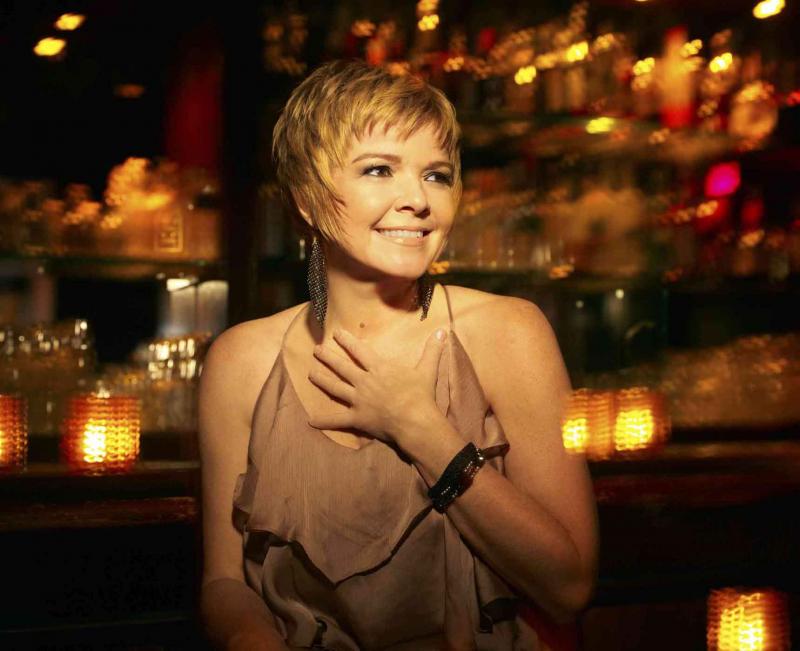 NY Times’ Stephen Holden: “Her show, whose selections change with every set, is a celebration of a 13-album career that is one of the most stable in jazz. She has an easy mastery of bebop, bossa nova, chanson and soft rock, to name four of the many styles in which she is comfortable.”

Four-time Grammy nominee Karrin Allyson has confirmed a series of U.S. tour dates for the months ahead, including multi-night visits to Los Angeles and to San Francisco in September. Each city will feature top-notch musicians joining singer/pianist Allyson — see below for a breakdown of shows and performers.

Allyson has earned extraordinary coverage over the past year, for her breakthrough 2011 CD ‘’Round Midnight’ as well as for her live shows. Respected critic Stephen Holden of The New York Times had this to say about Allyson, just a few weeks ago:

To follow Billy Joel’s sober hymn, “And So It Goes” with the frantic chromatic babble of Clifford Brown and Jon Hendricks’s “Joy Spring” is quite a leap for any singer. But Karrin Allyson made it look easy on Thursday evening at Birdland. Her show, whose selections change with every set, is a celebration of a 13-album career that is one of the most stable in jazz. She has an easy mastery of bebop, bossa nova, chanson and soft rock, to name four of the many styles in which she is comfortable. A hallmark of Ms. Allyson’s performances is her casual attitude toward phrasing and interpretation. In her unstudied approach she is a cheerful, gamin roustabout hanging  out with the guys. Jazz singing is for fun, not for carving statements in stone, although she put some weight behind her duet with the bassist Ed Howard on “ ’Round Midnight.” Filling out her trio were Todd Strait on drums and Bruce Barth, a pianist with a heavy touch that served her well on “I Ain’t Got Nothin’ but the Blues” and less so on ballads like “I Cover the Waterfront.” With her narrowed eyes, doll face and Cheshire cat smile, Ms. Allyson is also sexy. But in her original blues song, “Sweet Home Cookin’ Man,” for which she commandeered the piano, the innuendo was minimal. Ms. Allyson knows when to improvise and when not to. “Joy Spring” elicited a scat solo that amplified the song’s euphoria. Underneath Ms. Allyson’s sweetness is a core of toughness, which revealed itself in the Blossom Dearie hit “Bye-Bye Country Boy,” about a traveling musician’s dalliance on the road. Behind it all is a musician whose concepts are rooted in the songs she sings. “It Might as Well Be Spring,” which, when sung by a woman, is often treated as the fluttery romantic daydream of an ingénue, was accelerated and pumped up with drums to become an exhilarating expression of visceral excitement.

Karrin Allyson on vocals/piano
Rod Fleeman - guitar  (appears on ‘Round Midnight and many other Allyson CDs)
Jeff Johnson - great Seattle-based bassist
Todd Strait- terrific Portland, Oregon-based drummer, has played and recorded with Allyson for many years.

‘Round Midnight (Concord Jazz) earned vocalist/pianist Allyson the best reviews of her illustrious career and the widest range of coverage she’s ever encountered, as the elegant, dreamy music was embraced not only by her core jazz audience but by mainstream, Broadway/Theater press, syndicated radio, web-based editorial outlets, regional television and much more. Many of America’s most respected journalists weighed in with praise, from USA TODAY’s Gardner to THE NY TIMES’ Holden to Associated Press’ Charles Gans to Wall Street Journal’s Will Friedwald to Sirius/XM’s Jonathan Schwartz to NYT’s Nate Chinen and dozens more.

‘Round Midnight was recorded at Sear Sound in NYC, and was produced by Karrin Allyson and Nick Phillips. The CD is available for via Amazon.com and other outlets.