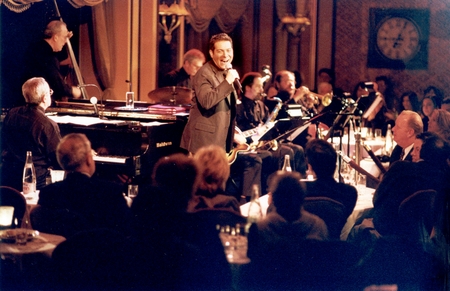 slideshow
FEINSTEIN'S AT LOEWS REGENCY, the nightclub proclaimed “Best of New York" by New York Magazine and “an invaluable New York institution" by The New York Post will continue its Fall 2011 season with the first New York joint engagement of the club's founder MICHAEL FEINSTEIN and critically acclaimed vocalist LINDA EDER. The two powerhouse performers will share the spotlight in their show “Two For The Road." The evening will feature classics from Harold Arlen, George Gershwin and Sammy Cahn; hits from newer writers like Peter Allen, Joni Mitchell and Michel Legrand; and selections from Michael's upcoming CD The Sinatra Legacy. Music Director Billy Jay Stein will conduct a seven piece band. The show will run September 6 to October 1 at the Loews Regency Hotel (540 Park Avenue at 61st Street).

MICHAEL FEINSTEIN, the multi-platinum-selling, five-time Grammy-nominated entertainer dubbed “The Ambassador of the Great American Songbook," is considered one of the premier interpreters of American standards. His 200-plus shows a year have included performances at Carnegie Hall, Sydney Opera House and the Hollywood Bowl as well as the White House and Buckingham Palace. Feinstein is nationally recognized for his commitment to celebrating America's popular song and preserving its legacy for the next generation. He serves on the Library of Congress' National Recording Preservation Board.