slideshow
All About Jazz members are invited to enter the Talking House Records “Blueprints of Jazz, Vol. 1-3“ giveaway contest starting today. We'll select FIVE winners at the conclusion of the contest on April 26th.

(Following Billy Harper at AAJ automatically enters you in the contest.) 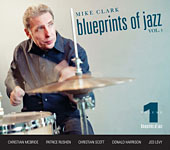 Mike Clark made his mark on the jazz scene as a drummer in Herbie Hancock's band in the 70's, particularly with the release of Hancock's groundbreaking album Thrust in 1974. The album features “Actual Proof", a song in which Mike breaks down the barrier between funk and jazz, laying down a solid up-tempo funk rhythm while simultaneously improvising jazz fills and accents. This seminal recording caught the ear of musicians everywhere, and gained Mike a cult status among drummers. Over three decades later, Blueprints of Jazz captures the current sound of Mike Clark, and finds him still at the top of his game, performing with a top notch group that includes Christian McBride (bass), Patrice Rushen (piano), Donald Harrison (alto sax), Christian Scott (trumpet), and Jed Levy (tenor sax).

“He's a great jazz drummer- and he hasn't lost any of the stuff that he brought from Oakland. So now he's totally free to do both, and he does. The solo he played on the album Thrust, on the song “Actual Proof", is one of the best drum solos on any of my albums. So many people have remarked about that solo, saying, 'Incredible'" -Herbie Hancock 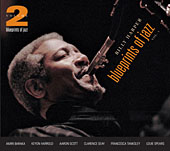 Billy Harper began his brilliant career as a professional musician just as the career of another brilliant saxophonist by the name of John Coltrane was coming to a close. Influenced by Coltrane's sound and the vibe of the jazz scene in New York at the time, Billy pushed forward with a big, majestic sound of his own. Over the next ten years, the sound of Billy Harper helped shape the stylings of some of the greatest musicians of that era, including Gil Evans, Art Blakey, Lee Morgan, Thad Jones, Mel Lewis, and Max Roach. Billy's sound has continued to evolve, with a unique rhythmic emphasis and vocal-like character, and always an underlying spiritual quality. Never one to join the latest fad or compromise for commercial reasons, Billy's music represents his true artistic vision. This vision can be heard on Billy Harper's Blueprints of Jazz recording, which includes Francesca Tanksley (piano), Clarence Seay (bass), Louie Spears (bass), Keon Harrold (trumpet), Aaron Scott (drums), and features spoken word poetry from Amiri Baraka.

“Whoever invented the expression 'he comes to play' must surely had someone like Billy Harper in mind... he is one of the most original inventive composers I've encountered." -Peter Keepnews, The Village Voice

Donald “Duck" Bailey has helped define the pulse of jazz for more than five decades. Oddly, you're unlikely to find his name listed among fellow trap set innovators; but there is no doubt about Bailey's far-reaching and enduring influence, which dates back to his nine-year tenure with Hammond B3 legend Jimmy Smith from 1956-64. Bailey didn't just help cement the B3, guitar and drums as the definitive instrumentation of the organ combo; he created a lithe trap set vocabulary that gave Smith plenty of room to lay down fat, pedal-generated bass lines while expertly driving the thrilling crescendos that made Smith such a dynamic performer. The generations of musicians who came up in Bailey's wake have all received potent and enduring musical wisdom from the drummer via his work with Jimmy Smith, and he's still got plenty to teach. Bailey's handpicked band for this set includes pianist George Burton, bassist Tyrone Brown, tenor saxophonist Odean Pope, and special guest trumpeter Charles Tolliver.

“He is without question one of the most unique drummers I've ever played with..." -Tyrone Brown, bassist