SOURCE: ALL ABOUT JAZZ
October 8, 2008
Sign in to view read count 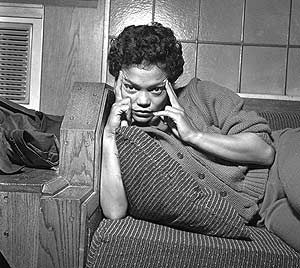 slideshow
"The most exciting woman in the world" -
Orson Welles on Eartha Kitt, 1950.

It is with great pleasure that Network announce the releases of EARTHA KITT LIVE AT THE CHELTENHAM JAZZ FESTIVAL (E) on DVD on 27th October 2008, RRP 19.99 and CD, RRP 12.99. This is, unbelievably, Eartha Kitts first ever live concert DVD. These releases are recordings of her sell-out opening concert at the world renowned Cheltenham Jazz Festival in 2008.

With a career that started in the late forties and which is still going strong 65 years later, it would not be an exaggeration to call Eartha Kitt a living legend. Her electrifying and unforgettable concerts are always complete sell-out affairs. She is versatile and multi-talented; she is at once a star of the movies, television, the stage and a wondrous singer/performer in both jazz and cabaret.

Kitt got her start as a member of the Katherine Dunham Dance Troupe. On a friends dare, the shy, teenage Kitt auditioned for the prestigious company and won a spot as a featured dancer and vocalist. She made her film debut in Casbah (1948). Her work ranges from her part as Catwoman in the late 1960s Batman television series, doing the voice for YZMA, the villain in Disneys animated feature The Emperors New Groove, to Orson Welless production of Dr. Faust. Her stage career is just as exciting and inspirational. She was booked at The Village Vanguard in New York. Her beauty, unforgettable voice and her electrifying presence very quickly attracted the attention of a Broadway producer, who put her in New Faces of 1952. It was here that she firmly asserted herself as a star of Broadway. Eartha Kitt sings in ten different languages; she has performed in over one hundred countries and was honoured with a star on The Hollywood Walk of Fame in 1960.

These releases are from her performance earlier this year when she headlined the prestigious Cheltenham Jazz Festival. This thrilling performance can be enjoyed by Kitt fans, as well as anyone with a passion for Jazz.

ALONE (An autobiographical reflection in song written by Eartha Kitt and her musical director Daryl Waters).