Eartha Kitt: Purr-Fect & In Person at the Plaza 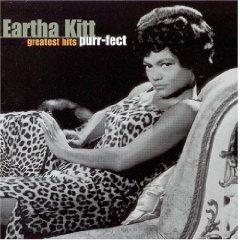 The singer and actress Eartha Kitt (1927-2008) was the ultimate femme fatale, “the most exciting woman in the world" according to film director Orson Welles. Purr-Fect: The Eartha Kitt Collection is an enjoyable if flawed greatest hits collection. In Person at the Plaza a representative and recommended live recording.

She may not have had Edith Piaf's musical instrument ...