SOURCE: TWO FOR THE SHOW MEDIA
February 1, 2012
Sign in to view read count 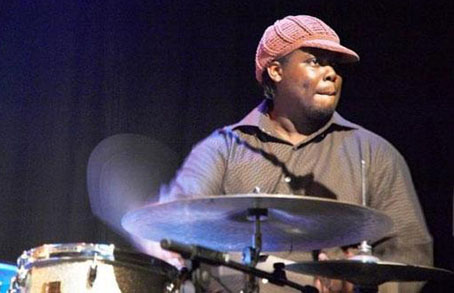 slideshow
A professional jazz musician's life is a busy life. Traveling from country to country and performing nightly with a multitude of different groups takes up a large amount of time and energy. It isn't easy for one to pursue his or her own musical projects or develop an ensemble. Rarely does a musician stick with a project long enough to create something extremely special. Johnathan Blake is an exception to the rule.

Drummer/composer Blake has been an integral part of the working groups of Tom Harrell, David Sanchez, Russell Malone and Kenny Barron for many years. He is also a tremendously talented composer and bandleader. His debut album The Eleventh Hour (Sunnyside) will be a new landmark on the road Blake has taken with his long running ensemble.

Though he is extremely active as a sideman, Blake has made a concerted effort to create an ensemble. Most importantly, an ensemble with a sound. Though it seems an obvious goal, it really is a lofty target in a world of one-nighters and pick up bands. Blake was able to accomplish this by enlisting a true murderer's row of jazz heavy hitters, friends and longtime collaborators, including saxophonists Jaleel Shaw and Mark Turner and bassist Ben Street along with the band's latest addition, pianist Kevin Hays.

Born and raised in Philadelphia, Blake is the son of jazz violinist John Blake and carries on the family tradition of great music making. He was also blessed to be a part of a vibrant young generation of musicians that has continued to forge their paths together. Blake and saxophonist Jaleel Shaw are longtime friends and accomplices. Mark Turner and Ben Street have been important collaborators since Blake's earliest years in New York, especially during his association with guitarist Kurt Rosenwinkel. Blake has certainly created a group with deep musical roots.

The disc begins with the title track, a sly Robert Glasper played Rhodes is accented by the nimble horns and harmonica accents from guest Grégoire Maret, echoing the late '60s work of Herbie Hancock. “Rio's Dream" begins with a tumultuous A section of changing time signatures representing a nightmare only to be calmed by an open groove, reassuring the anguished dreamer. Tom Harrell's under-recorded gem “Blue News" is lovingly reworked and features the composer as a special guest.

Randy Newman wrote “Dexter's Tune" for the 1990 film Awakenings and is featured in a scene that Blake found particularly moving. Blake adapts the tune from chord changes that were given to him on a napkin by the late piano master Kenny Kirkland. “Time to Kill" is an older piece that Blake was able to write when he actually had some time to kill. The driving piece showcases Shaw's vibrant alto alongside Harrell's poised trumpet and Glasper's driving piano. “Of Things to Come" is a smoking piece with a melody built on 4ths.

The very open and dancing “Freefall" was named after an audience member misheard Blake and thought he said the title was “Newton" rather than, “This is a new tune." With Sir Isaac Newton in mind, she had interpreted the song as a “free fall." The name stuck and seems very appropriate. “No Left Turn" was based on a serial music 12- tone row that John Coltrane had used on “Mile's Mode," a song that Blake loves. The composition was written as part of a project assigned by Rutgers jazz department head Stanley Cowell. The tricky tune includes a fantastic turn by guest saxophonist Tim Warfield as he navigates the ever-changing rhythmic path.

The tune “Clues" is a new take on “Evidence," actually it uses Thelonious Monk's classic melody just backwards and upside down (with some changes to make it work). Blake had wanted to use “Evidence" and really make it his own. The closing tune is by another great pianist/composer but of the current generation. “Canvas" is a tune by Robert Glasper that Blake had always wanted to record. Blake has always envisioned children's voices on the tune and uses samples of his own children as an introduction. Maret plays the haunting melody beautifully.

After such a productive career, many will think that it was about time Blake released an album. The Eleventh Hour proves that not rushing and taking the time to let a band gel and develop has been extremely worthwhile, as this is as impressive a debut as there has been seen in some time.