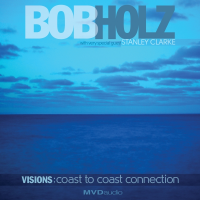 slideshow
Jazz-fusion composer and drummer Bob Holz will be releasing his third album VISIONS: Coast to Coast Connection, featuring bass legend Stanley Clarke on February 23, 2018! “This collaboration with the jazz star and Return to Forever bassist/composer, Stanley Clarke involved the recording of new compositions I wrote taken from my roots in jazz, classical, blues and rock music,” says Holz. Joining Holz and Clarke is former Mahavishnu Orchestra bassist Ralphe Armstrong who currently plays in Holz's touring band, Bob Holz and A Vision Forward featuring Jamie Glaser and Ralphe Armstrong. “My compositions have plenty of room for interplay between both bass players,” adds Holz. Bob Holz is presently managed by Roy Holland Productions and is signed to MVD Entertainment Group.

“I'm really honored to record with Stanley Clarke as his music has been a strong influence on me,” added Holz. Clarke has written the music for over 70 major motion pictures in addition to his successful solo career and long tenure as a member of Return to Forever with Chick Corea, Al Di Meola and Lenny White.

“I enjoyed playing this music very much. Good players along with good compositions is always a winning combination!”—Stanley Clarke

The recording took place in Los Angeles with famed sound engineer, Dennis Moody recording, mixing and mastering the performances. “Dennis mixed my last album and really knows how to create a world class record,” continued Holz. Moody also helped out with mixing Holz's band live last May at Catalina Bar and Grill Jazz Club in Hollywood, California. Stanley Clarke also attended that concert which led to the upcoming recording session for Holz's next album. Additionally, Executive Producer Rob Stathis once again contributed his production skills to the making of the record. Rob Stathis has been involved with producing Holz's past collaborations with guitarist/composer the late Larry Coryell. “The loss of Larry Coryell last February was really rough. Bob and I want to continue in the tradition which Larry excelled in,” says Stathis.

“Many years I have been friends with Stanley Clarke, we talked about recording together!! Bob Holz made it happen on this recording!”-Ralphe Armstrong