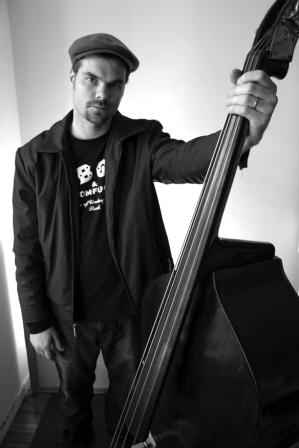 “There's something about bassists who lead their own groups and write their own music that strikes a deep chord with me (no pun, intended). Michael Bates's new release is right up there with new releases by Drew Gress and William Parker. The playing by all in the band is passionate and Bates' pulse propels Nachoff, Johnson and Davis through a set of fantastic music. These guys take no prisoners. One of the best releases of 2008! Recommended highly." --Maurice Hogue “One Man's Jazz" CKUW

“Simply put, Bates has the ability to make a huge impact on the existing state of modern jazz!" --Glenn Astarita

On September 9, 2008 Dave Douglas' label, Greenleaf Music, will proudly release Clockwise, the new recording from contrabassist/composer Michael Bates and his quartet Outside Sources. Taking equal inspiration from jazz, western classical music, and lasting modern acts as disparate as the Bad Brains and Ornette Coleman, Clockwise offers a panoramic view of the engaging musical mind of Michael Bates, and will prove to be a watershed for enthusiasts of cutting-edge composition and improvisation. This dynamic collection of nine original works (the latest additions to an oeuvre bulging with more than 200 compositions) blurs the line between composition and improvisation and leaves the listener in a vertiginous space where tradition teeters at the knife-edge of a modern zest for experimentation and evolution. Dave Douglas on Michael Bates' Outside Sources and Clockwise: “I whole-heartedly recommend taking special note in Outside Sources! Michael Bates is a fantastic bassist and an engaging composer." Available on Greenleaf Music on September 9, 2008.

Michael Bates' growing boldness as a composer earmarks 2008 as a banner year. This emerging innovator plays at the crossroads of structural experiment, contrapuntal rapture, and inarguable charisma. His quartet, Outside Sources, featuring Russ Johnson (trumpet), Quinsin Nachoff (saxophone, clarinet) and Jeff Davis (drums), is more than just an assemblage of virtuoso musicians, it is a road-tested ensemble that showcases the full breadth of Bates' musical identity.

Track 1: “Great Exhibition" is an energetic polyrhythmic and contrapuntal piece inspired by a similarly named chapter in a Jeanette Winterson novel called Lighthousekeeping. It sets the tone for the album by showcasing a fluid composition that stacks rhythms in 5, 4 and 3 and then moves into a Stravinsky-esque section that almost cuts and pastes between two different textures. “Great Exhibition" cunningly obscures the written and improvised sections and also reveals a facile, road tested quartet, Michael Bates' Outside Sources. It's a band that plays very interactively and nails the written material making this complicated music sound fun and almost effortless.

Track 2: “Damasa" is a high energy tune that features virtuoso playing by Jeff Davis and Quinsin Nachoff. It careens and veers through several different zones-fast swing, loose Ornette-like lines and heavy grooves all mashed together into a huge crowd pleaser.

Track 3: The ballad “Rideau Medals" represents Michael's attempt to put an incredible story into music: His mother and aunt were out walking one morning and found themselves becoming instrumental in saving a young woman from being viciously attacked by her ex-husband. This unbelievable story contains a gun battle, a car chase, the triumph of the human spirit and like some Hollywood movies, a happy ending where the woman is saved. Michael's mother and aunt were declared national heroes of Canada and he was invited to attend a ceremony where they and several other “heroes" were receiving medals of bravery. The stories were as varied as they were heart wrenching and exhilarating and this beautiful and melancholy ballad represents how Michael worked at illustrating the different waves of the emotion that this trip represented.

Track 4: “Machinery" combines angular melodies, different meters, odd bar lengths and quirky 3/8 melodies into a track that truly represents the essence of Michael Bates' quartet: high energy, exciting playing by unique musicians that is wonderfully intuitive. This is highly complex and linear music played with a lot of character and the improvising features a team of Russ Johnson and Quinsin Nachoff trading some blistering lines over top of the bass and drums moving wildly between 4/4 and 3/8. “Machinery" contains music that is truly interactive, entertaining and exciting.

Track 5: “Fellini" stems from a fascination with music in 3/4. A waltz can sound both even and odd rhythmically and among others, can sound both absurdly happy and somewhat sinister. Similarly, filmmaker Federico Fellini is a master at creating alternate realities in his movies and this track is influenced by emotions conjured up in his films. It is based on a juxtaposition of 6/8 against 3/4 and like many of Bates' compositions on Clockwise, Fellini weaves it's way through many places and obscures the line between composition and improvising. The melodies are lovely and engaging but go into many unexpected places. Also, this piece highlights Michael's formidable arco abilities as well as his love of the Russian composers.

Track 6: “Lighthousekeeping" is one of the standout tracks of the album. It's simple and folk-like melody is beautifully underpinned by a series of “hits" that obscure where the beat is. Still it grooves in a quiet way and creates a strong mood that draws in the listener to a place very different from other pieces on the CD. The name Lighthousekeeping is inspired by Jeannette Winterson's novel of the same name.

Track 7: “Marching" is a tour de force in trumpet playing. Written expressly for Russ Johnson and sounding almost like a modern trumpet concerto, “Marching" starts off with a solo trumpet excursion and becomes an exciting duo between drummer Jeff Davis and Mr. Johnson. Quinsin and Michael join the fray to form a mad tango and then finally off into a fiery tenor solo over a seven bar Russian sounding theme.

Track 8: “Bloodletting" is another departure track on the album Clockwise. Gone are the contrapuntal lines and complex compositions. In their place is a robust and bluesy melody over a vicious 12/8 groove that allows tenor saxophonist Quinsin Nachoff to let fly. This track grooves hard and gives the listener an opportunity hear another side of this quartet.

Track 9: “The Russian School" directly refers to Michael's love of “the Russian School" of modern composers. The voices of Shostakovich, Prokofiev, Ligeti, Bartok are primary influences in this piece. When asked about the music of Dmitri Shostakovich, Michael comments: “... he can write a melody that can break your heart but there's this element of anger that creates such a emotional rub. The phrase “laughing through tears" is often used when speaking of Russian music and this applies to much of the emotional content of this piece....". The Russian School starts out with a robust and angry pedal underneath a long melody in the horns and then descends into a heart wrenching and sentimental theme that features Russ Johnson's exquisite trumpet playing. The music quickly escalates and Quinsin Nachoff's tenor solo brings in an aggressive and cathartic return to the original pedal. The album ends with a lovely return another quiet theme. Beautiful.

His debut CD Outside Sources was called one of the best albums of 2004 by Cadence Magazine editor Bob Rusch. His second album, “A Fine Balance" (2006) was also exceptionally received and garnered many effusive reviews including several “best of 2006" designations. Released on the German based record label, Between the Lines, A Fine Balance contains ten compositions that combine exquisite melodies and contrapuntal textures with an organic and interactive approach to playing jazz.

Michael's latest recording is set for a fall 2008 release and will be available on trumpeter Dave Douglas' label Greenleaf. Mr. Douglas notes, “I whole-heartedly recommend taking special note in Outside Sources! Michael Bates is a fantastic bassist and an engaging composer.". The new CD Clockwise will feature several more contrapuntal pieces that have been described as “gems that manages to navigate that most difficult and rarely traveled road leading to accessible experimentation....always forward-thinking but also beautiful and within the grasp of even the most casual jazz fan. (Chris Watson, “The View").

Michael grew up in Canada and often worked at the Vancouver International Jazz Festival. Even though he was exposed to musicians such as Sun Ra, Thomas Chapin, the Clusone Trio and Dave Holland, he began playing music in hardcore and punk rock bands and maintains that being a jazz musician is no different. While the music he writes and performs is rooted in the jazz, classical and creative music traditions, hardcore's 'Do It Yourself' ethos remains an important component of his music. He is well known as a hard worker and motivated performer.

Michael has recorded three CD's as a leader and over a dozen as a sideman. He has composed well over two hundred pieces of music including works for chamber ensembles, string quartets and solo double bass. As a touring artist, he has visited Europe, Asia, the United States and Canada. Michael has received several grants and fellowships from the Canada Council of the Arts and was on faculty for five years at the Banff International Jazz Workshop. He has studied with the former principal bassist of the Tokyo Symphony, Yoshio Nagashima, at the University of Toronto with Don Thompson and Dave Young and in New York with bassist/composer Mark Helias and Tony Falanga. Michael currently lives in Brooklyn, New York with his wife, Celena and small dog, Cosmo.