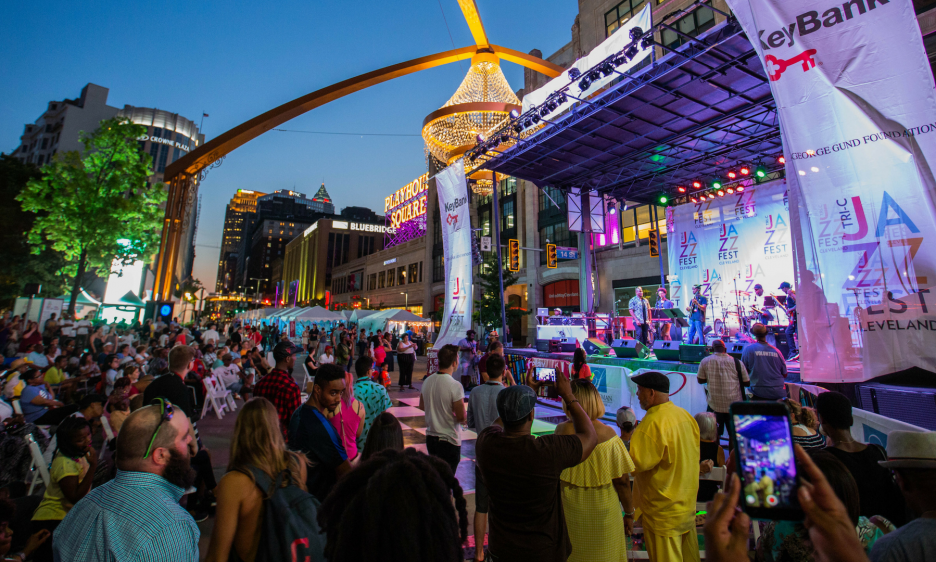 This year is it's almost like opening the gateway.
—Terri Pontremoli, Tri-C Jazz Fest Director

At Cleveland's Tri-C Jazz Fest, everything new is old again.

That might sound retrogressive in a culture that valorizes novelty, but the announcement that the 43rd edition of the festival will return to the historic theaters of Playhouse Square is instead a comforting, Biden-era byword after the disruptions of the past two years.

The festival also returns to a three-day schedule, June 23-25, and to a booking policy that incorporates artists with appeal beyond a narrow jazz audience. Anthony Hamilton, a rich-voiced vocalist is a particular favorite of Alex Johnson, Ph.D., the president of Cuyahoga Community College who is retiring in June and to whom the concert at the Public Auditorium is dedicated.

Friday June 24 has a local feel with concerts by trumpeter Sean Jones, who grew up in nearby Warren, Ohio (Allen Theatre) and by Sound Prints, the collaborative that includes trumpeter Dave Douglas and hometown hero tenor saxophonist Joe Lovano. The evening shows aim for crossover appeal with Brian Culbertson at the Connor Palace at 8 p.m. followed by Ghost-Note, a Snarky Puppy spinoff project of percussionists Robert “Sput" Searight and Nate Werth (Mimi Ohio Theatre).

Saturday's lineup begins at the Allen with French vocalist Cyrille Aimee with Clevelander Dominick Farinacci himself a graduate of Tri-C's jazz studies program. Latin music is honored in the afternoon program with two concerts at the Mimi Ohio Theatre. Guitarist/vocalist Raul Midon is up first followed by a concert by NEA Jazz Master Eddie Palmieri, still the brightly shining Sun of Latin Music at 85.

After a centennial tribute to Toots Thielemans by pianist Kenny Werner and harmonica virtuoso Gregoire Maret, JazzFest will close with an all-star big band gala led by bassist and longtime friend of the festival John Clayton with special guest guitarist and vocalist John Pizzarelli.

Beyond those marquee ticketed events, the Playhouse Square area will also host outdoor events at a student stage, a local band stage as well as the return of the Jazz Talk tent, cooking demonstrations, kids' activities, food trucks and more.

If this looks a lot like JazzFests past, that was part of director Terri Pontremoli's plan. “I feel this year is it's almost like opening the gateway," she said in a telephone interview in February. Pontremoli acknowledged that the situation for touring artists is still complicated and that jazz festivals, including those in Saratoga, Rochester and Ottawa scheduled for the same weekend, are building the airplane while it is in the air.

Pontremoli was also quick to point out the lessons learned and unique beauty of the last two festivals. Of the all-virtual 2020 JazzFest, she said, “Instead of us bringing people in from all over the world and presenting them, we presented our people all over the world, virtually." The 2021 Festival was a two-day, all-jazz affair outdoors at suburban Cain Park “I think people loved it," Pontremoli said. “I think they loved the way it felt, the way it looked. the way it sounded [and] the whole feeling of community with people talking and buzzing about the acts."

So, JazzFest 2022 is full speed ahead propelled by a mission. “I think that jazz in general—I still really believe this—jazz represents what's best about America." Pontremoli, who has presented the music for decades, said. “A lot of people that don't know jazz would never quite understand that, but jazz audiences and jazz musicians are fighters and always looking for equity, equity on a bandstand. We can learn a lot from that. There's still order, but there's also equity. There's still independence and freedom, but there's equity. So I think the jazz and jazz musicians and jazz presenters can be very influential in a movement that gets us to a better place."

In Cleveland and June, the path to that place begins at Playhouse Square.