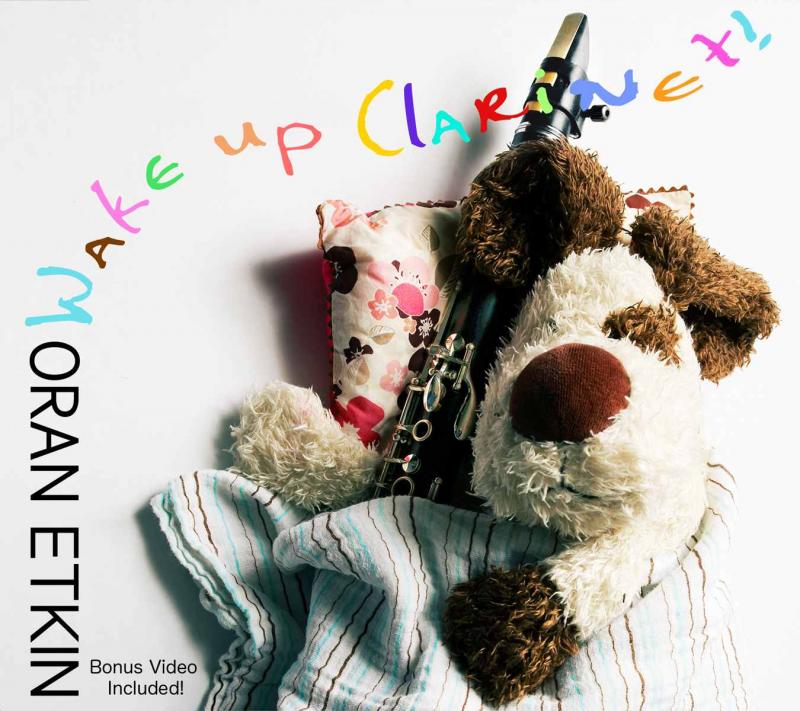 CD Release Concerts for Wake Up Clarinet, as well as Performances by Etkin's Group Kelenia, Scheduled Throughout 2010

..."really really remarkable... he has touched both of our boys' lives." --Naomi Watts and Liev Schreiber

“Oran Etkin makes music from all over the world accessible and fun for children to listen to and learn about. From the age of two, our son was talking about Herbie Hancock, Mozart, Samba, and African music--and he knew the difference." --Harvey Keitel and Daphna Kastner Keitel

“immediately connects to a child's imagination... I am looking forward to seeing my younger child grow to feel and love music in Oran's classes too, and to all the dancing and be-bopping with both kids in our house to his new CD!" --Edie Falco

“Oran is able to impart complex musical ideas in such a unique and fun way that the children learn without ever knowing they are learning. They get engrossed in the stories and music-making for 45 minutes and come out the other end feeling like Tito Puente is their lifelong friend and that they too can play the drums and make the xylophone 'talk.'" --Ken Burns and Julie Burns

Oran Etkin, an internationally acclaimed jazz/world artist and composer whose NYC based music classes for children are endorsed by Harvey Keitel, Naomi Watts and Liev Schreiber, will release Wake Up Clarinet! on his new Timbalooloo label (September 14, Motema Music /Allegro-NewSound distribution). Coinciding with this release is the launch of Oran Etkin's Timbalooloo, a new company which will make Oran's popular music classes available to hundreds of children throughout the New York City metropolitan area and other cities. It will also serve as the umbrella for all of Etkin's work with children through CDs, concerts, DVDs, books and television programming.

Wake Up Clarinet! is the first family release for Etkin, who was a featured performer on Putumayo Kids' award-winning compilation album Jazz Playground earlier this year and whose 2009 Motema debut, Kelenia, was named Best World Beat Album by the Independent Music Awards. With Wake Up Clarinet, Etkin turns the spotlight on his innovative Timbalooloo method for enriching the innate musicality of young children. Etkin's method effortlessly conveys sophisticated concepts in a fun musical language that kids of all ages can understand.

The recording is as musically rich as it is engaging. The all-star band, featuring Jason Marsalis on drums, and the talents of soulful jazz vocalist Charenee Wade, provides an introduction to jazz and other musical styles. Other featured artists include Fabian Almazan on piano, Curtis Fowlkes on trombone, and Garth Stevenson on bass. Etkin is lead vocalist and performs on the clarinet and saxophone.

From the first song, “High Low," it is apparent that this is no ordinary children's recording. The song helps children internalize the concept of pitch through be-bopping musical phrasings and an easy going conversation between Etkin and Wade. Their jazzy take on the familiar nursery rhyme, the “Little Lamb Jam," is so engaging it was selected for the recent Putumayo Kids CD, Jazz Playground, which won a 2010 Parents' Choice Gold Award and placed Etkin in the national spotlight for his childrens music. The Philadelphia Daily News ran a feature article headlined “Pied Piper Oran Etkin Wakes Up Instruments and Audiences."

After this rousing start, we get to the title song,"Wake Up Clarinet." The instrument literally comes to life through Etkin's masterful , vocal style of performance. With the fourth and fifth tracks, even very young children will be singing “Eh La Bas" New Orleans style, and they'll even be able to tell their parents which French king the state of Louisiana was named after. Wake Up Clarinet! works both to introduce musical concepts and paint a captivating picture rich with historical and cultural context.

Oran Etkin has been described as a “great clarinetist" and “an excellent improviser" By the New York Times' jazz critic Ben Ratliff, and as a “woodwind maestro" by PRI's internationally syndicated show, Afropop Worldwide. He has performed around the world with musicians ranging from jazz guitarist Mike Stern to rapper Wyclef Jean. His 2009 album Kelenia (Motema Music), fuses traditional Malian and Jewish music with modern jazz creating what the Boston Globe dubbed a “hypnotic balance between straight-ahead jazz and world music." Etkin brings this uniquely diverse perspective to his music for children, which incorporates rhythms and melodies from all over the world. For example, after concert tours in Haiti, Africa and Europe, Etkin returned to New York and adapted songs from these regions for his Timbalooloo music classes.

Oran Etkin's Timbalooloo gets its name from a three year old boy enrolled in Etkin's music classes, who expressed his extreme musical excitement by sitting his parents and baby brother down for a 20 minute “music class" during which he pretended to be Oran and demonstrated to his “pupils" a new instrument he called the timbalooloo. The story captures the essence of Etkin's mission: to excite children about the wonders of music and musical instruments and encourage their creative freedom and personal ingenuity.

Etkin will promote the CD through his developing Timbalooloo programs as well as at his performances at jazz, world beat and family music festivals internationally. For more information about Wake Up Clarinet! and Oran Etkin's music, visit oranetkin.com or the Oran Etkin's Timbalooloo page on Facebook.