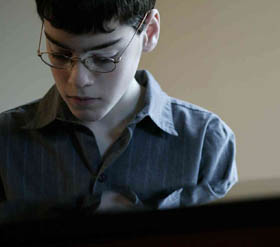 slideshow
New York, NY—Jazz composer and pianist Matt Savage will celebrate the release of his new album, Welcome Home, with a concert at Dizzy's Club Coca-Cola, Jazz at Lincoln Center in New York City on Monday, February 21st. He will be joined by three of the guest musicians featured on the CD— sax great Bobby Watson, bassist Joris Teepe, and drummer Peter Retzlaff.

Welcome Home peaked at #18 on JazzWeek's radio airplay chart and is currently #5 on the CMJ Jazz chart. All About Jazz recently praised the album saying, “this is Savage's album all the way, as he not only plays with a maturity well beyond his years but wrote and arranged every number."

Welcome Home celebrates Matt Savage's travels and the many places he calls “home," from his organic family farm in the country to the rhythms of a metropolitan city. The album flows from the pastoral tempos of songs like “Picturesque" and “Seasons Change" to the energy of college life in Boston and concerts in New York City. One of the highlights is the Manhattan-inspired single, “Big Apple Blues" from the five-part song, “Big Apple Suite." It's no wonder Matt considers Manhattan a “second home," considering his landmark musical appearances in that city. At the age of 11 he debuted at the famed Blue Note, and the following year he appeared at Birdland with the legendary Clark Terry on trumpet and Jimmy Heath on sax.

Matt first performed at Dizzy's Club Coca-Cola in 2007 with the Matt Savage Trio. In 2008, he debuted Big Apple Suite at New York's Cachaça Jazz Club, earning praise from the Wall Street Journal as “a phenomenally talented pianist and composer who demands to be taken seriously on purely musical terms."

From the country to the city to concerts around the world, Matt Savage continues his epic journey as an extraordinarily talented jazz composer, performer and pianist. With exceptional music and a stellar lineup of musicians, jazz fans are sure to enjoy every minute of Matt's Welcome Home concert at Dizzy's Club Coca- Cola.