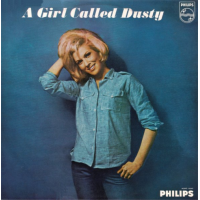 slideshow
One of my favorite Blossom Dearie albums is That's Just The Way I Want to Be. Recorded in London in early 1970 for the European Fontana label, the album features all hip, pop originals, most of which you've never heard before. Blossom is impossibly vulnerable and delicate on the record. Nestled among the album's gems is my favorite Blossom Dearie song—Dusty Springfield. Last week, I was emailing with singer  and poet Arlene Corwin in Sweden, and it turns out she knows a thing or two about this song's creation.

“Jim Council, Blossom's co-writer on Dusty Springfield and a handful of other songs on Blossom's album That's Just The Way I Want to Be, was my third husband. We married in 1964 in Lebanon, of all places. When I divorced Robin Palmer, I met James in New York around the time of the Cuban Missile Crisis in 1962. He had been teaching in a public school at the time but was fired. He had decided to read in the library during a so-called atomic-bomb drill in which the children were told to hide under their desks—as if that could save them or anyone else.

“When Jim made his decision, the principal immediately rang the Board of Education, which ordered him fired. The Teacher’s Union came out in support of him and, in an instant, Jim Council was a celebrity. Newspaper headlines and mass gatherings sprang up demanding that he be reinstated. That's when I met him. There was even a lawsuit filed by the Teacher's Union. They lost, thanks to a clause in the teachers contract denying them the right to refuse an official order, or something like that.

“Jim and I were married for 18 years. During this period, we lived mostly in Oxford, England. Before living there, we lived in Chico, California; Paris; Hydra, Greece, as neighbors of Leonard Cohen and Marianne Ihlen; Lebanon and, finally, England. Jim was an art historian and antiquarian bookseller reputedly working on his doctorate. Which he never finished. I sang—performing at Ronnie Scott's Jazz Club in London in 1972—and taught yoga. [Photo above of Arlene Corwin]

“Blossom Dearie (above) and I had been friends since 1954. Whenever she came to London to play at Ronnie Scott's, she stayed at Shirley Bassey’s London apartment. When she visited with Jim and me in Oxford, we all boated on the River Cherwell and she drank champagne. At the time, in the late 1960s, Blossom had these tunes that were lyric-less. God only knows why I, a songwriter for real, didn’t offer to write a lyric with her. But Jim, an academic, not very musical but filled with confidence, did.

“Well, with enormous patience, Blossom (above) worked bar by bar with Jim and out came these wonderful songs: Hey John, (about John Lennon, with whom there was mutual admiration; Sweet Surprise, I Like London in the Rain, I Know the Moon and Dusty Springfield.

“I was there the entire time they worked on Dusty and other songs. It’s possible they also worked on them when Blossom (above) stayed with us in Oxford. Jim never met Dusty, nor did I. As for Blossom and Dusty, we’ll never know, of course. What I do know is that Blossom was an admirer of Dusty, as was everyone. She was superb!

“Jim and I parted in 1984 when I traveled to Sweden to sing at a Stockholm hotel. There, I met Kent Anderson, fell deeply in love and left Jim, whose last words as he stood on the sidewalk as I drove away were, 'Come back soon.' That was 36 years ago. Jim stayed in Oxford, teaching art history at the overseas University of Maryland, married again and died in 2010 at age 81.

“I heard Dusty Springfield during its development. I have original copies of most of their collaborations. Funny, I’ve hardly ever used the songs while performing. Maybe I thought I’d never do them justice. Blossom was the master.

“I'm not sure how Norma Tanega came to be credited as a third writer on Dusty Springfield. Norma was an American folk and pop singer-songwriter and a painter, and, of course, Dusty Springfield's romantic partner. I do know that all the lyrics were Jim's. Perhaps that's the only way they could gain permission to use Dusty's name as a song lyric. I don't know.

The personnel on the album: Blossom Dearie (vcl,p) accompanied by Ian Carr (flhrn), Kenny Wheeler (tp), Ray Warleigh (fl), Harold McNair (ts,fl), Jeff Clyne and Daryl Runswick (b), Spike Wells (d), the Hooray String Section (strings), the Ladybirds (vcl), Brian Gascoigne (arr,cond) and the rest unknown. The album is a delightful toy chest of lovely melodies and clever lyrics. Dearie, clearly, was smitten with London and England of the era when the country was transitioning between the traditional old and the colorful, youthful new.

Here's Blossom Dearie in Paris in 1965 singing and playing I Wish You Love...

And here's Dusty Springfield singing the same song in 1967...

And here's Arlene singing I Remember You...