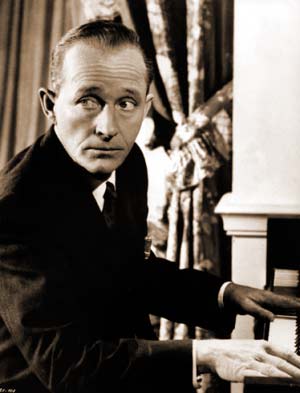 Once again, the Bing Crosby Archive digs deep into the vault to release a treasure trove of rare and unreleased material guaranteed to satisfy fans of Der Bingle— a 19 song CD of Christmas rarities, two disc collection of Bing's Christmas television specials, all making their DVD debut and a 7" vinyl single release of the classic Crosby/Bowie duet The Little Drummer Boy/Peace On Earth.

Infinity Entertainment Group's BING CROSBY: THE TELEVISION SPECIALS—Volume Two: The Christmas Specials showcases Bing's beloved holiday shows, all of which are making their DVD debut. Included in this premiere, four-hour plus, two-disc collection are Bing's first holiday special; his first color special; Bing Crosby and the Sounds of Christmas from 1971 and his final special, taped just five weeks before his death in 1977, Bing Crosby's Merrie Olde Christmas, which features the iconic duet of The Little Drummer Boy/Peace on Earth with David Bowie. All four specials are presented in their original uncut form. Bonus Material includes: Happy Holidays with Bing and Frank Show, a 1957 holiday episode of The Frank Sinatra Show filmed in color, and out-takes from the 1962 Bing Crosby Christmas special with Mary Martin.

Having sold hundreds of millions of records in the pre MP3 era, it is only natural that Bing Crosby return with a vinyl release, a 7" single of the Bing Crosby/David Bowie duet The Little Drummer Boy/Peace on Earth backed with a 1953 Bing Crosby/Ella Fitzgerald duet of White Christmas. This limited-edition release will be manufactured on red vinyl as befitting the season. Suggested Retail Price: $7.98

Collectors' Choice Music is also releasing BING SINGS THE GREAT AMERICAN SONGBOOK , an amazing 20-track CD collection of Bing singing the standards, which was previously only available as part of a public broadcasting pledge drive, now makes its retail debut. These high-fidelity recordings hail from Bing's 1954-1957 CBS radio sessions with Buddy Cole & His Trio, who provide an intimate jazz setting ideally suited for these songs and the incomparable Crosby. Four of the tracks are previously unreleased while the remaining 16 tracks made their debut last year on the acclaimed Mosaic Records 7-CD Boxed Set, THE BING CROSBY CBS RADIO RECORDINGS 1954-56. Songs include: 'S Wonderful; Ol' Man River; I've Got a Crush on You; Please Don't Talk About Me When I'm Gone; Anything Goes; Cheek to Cheek; Don't Get Around Much Anymore and That Old Black Magic.