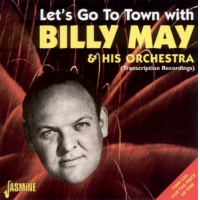 Something happened in the 1950s. Actually two things did. The generation that grew up during the Depression and fought in World War II turned 40 in 1955. Just as they blew out the candles, the long-playing album expanded from 10 inches to 12. Both trends set the table neatly for Frank Sinatra's recording comeback. By the time Columbia producer Mitch Miller had finished with Sinatra in 1951, he was a washed up novelty singer. What's more, the syrupy Columbia ballads that used to give comfort to forlorn teenage girls in the late 1940s no longer made any sense in the early '50s. Those girls had married.

After Sinatra signed with Capitol Records in 1953, he quickly became known for his swaggering approach and full-strength arrangements as he began to update the Swing Era songbook. His output for the label in the years that followed would connect more firmly with men going through a midlife crisis than their wives. But Sinatra wasn't the inventor of that ring-a-ding-ding style. Billy May was.

Starting in 1951, May had hits with instrumentals that overhauled Tin Pan Alley standards with a snappy freedom that borrowed liberally from Count Basie and Les Brown. In 2015, I posted on May's studio recordings from the early 1950s issued by Jasmine Records (go here). Yesterday I spent time with Let's Go to Town With Billy May & His Orchestra: Transcription Recordings, which Jasmine released in 2002. Listening to the tracks is like spending time with the musical tailor making the clothes Sinatra would wear for years to come.

The two-CD set features four different groupings of transcriptions. But first, for those who are unfamiliar with the definition of a transcription, I quote from George Hulme's notes:

“In the U.S, every town of any size had its own radio station and the larger cities had several. Most of the stations were quite small and could not afford to employ orchestras and there were restrictions on the use of commercial records. They solved the problem by buying recordings from transcription services offering records that were free of copyright restrictions and could be used to create programs or used as filler or background music. The transcription companies were often associated with the major record companies and used the same artists to perform similar material to that which the artists had recorded for commercial release. The U.S. government sponsored a large number of programs that were used as entertainment for military personnel."

The two CDs feature four different transcription recording session by May—the Talent Standard sessions in 1951, The Billy May Show for the Navy in 1954, The Voice of America show in 1954, and the National Guard's Let's Go to Town show recorded sometime in the '50s.

In the 1951 recordings, we hear the sassy garb Sinatra would slip into two years later. All of these May tracks are abbreviated versions of May's studio recordings taken at a slightly faster tempo. All run about two minutes or a pinch longer. There's All of Me, with May's signature dragging saxophones; the breezy When Your Lover Has Gone, which sounds as if you're riding in a speeding convertible from the period; and the fascinating I Guess I'll Have to Change My Plans, which glides along with the band's sections folding into each other.

At Capitol following Sinatra's signing, the deft arranger Nelson Riddle was able to deliver the octane of May's style but quickly developed his own more sophisticated sound for the singer. But in 1951, songs like Just You, Just Me and You're Driving Me Crazy were already fully formed Sinatra charts minus the voice. Sixty-six years after these transcriptions were recorded, May's vast contribution to Sinatra's '50s style and the influential innovations he brought to big band arranging have been largely forgotten. What a shame.

JazzWax by Marc Myers Billy May