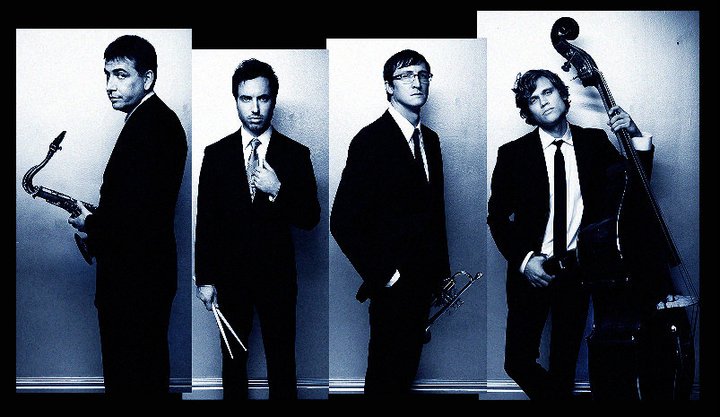 slideshow
The four members of New Tricks first discovered their uncanny musical affinity more than six years ago, and have been delving into creative possibilities ever since. Their brilliant sophomore CD Alternate Side, which New Tricks Records will release on April 5, is clearly a group effort in which the band mates interact with and complement each other as if they share one mind.

“This CD was recorded the way we had dreamed of recording," says tenor saxophonist and co-leader Mike Lee, the “old dog" of the group at age 47. “We played all of the material for three weeks on tour before our first recording session and then for another two weeks before our second session. By the time we recorded our tunes—which are sometimes difficult and always quirky—they felt as comfortable as playing a blues and we could concentrate on making music."

Lee and trumpeter/co-leader Ted Chubb are both from the Cleveland area, while bassist Kellen Harrison, and drummer Shawn Baltazor originally hail from Northern California. They met and clicked while members of the celebrated Cecil's Big Band, at the West Orange, New Jersey jazz club. All four musicians are firmly rooted in post-bop jazz traditions, yet they bring new twists to acoustic straight-ahead jazz conventions with their use of challenging rhythmic and harmonic devices.

“We're not playing without a chordal instrument in order to have more freedom," says Lee, who along with Chubb composed all the material on the new disc. “We feel that the absence of piano means we have more responsibility to play the harmony, not less. We want people to be able to hear the tune. Ted and I comp for each other. We try to catch part of the harmony while the other one's playing so that we reinforce the song."

Mike Lee left his native Cleveland for Brooklyn in 1984 and met trumpeter Dave Douglas at a Lower East Side jam session. The two young musicians became roommates and band mates for two years. “Living and playing music with Dave was a pivotal experience for me that directly influences how I interact and create as a member of New Tricks," Lee says. Also while in New York, Lee studied with fellow Clevelander Joe Lovano, and later toured with his teacher as part of Lovano's 11-piece Celebrating Sinatra band.

Lee has recorded three albums of his own: The Quiet Answer (1990), Above the Battleground (1998), and My Backyard (2002). Since 1997, he has toured the country frequently as a guest artist with local rhythm sections, often giving workshops at universities along his routes. He currently oversees classes for Jazz House Kids, an acclaimed program run by vocalist Melissa Walker that trains young musicians.

Ted Chubb, 30, studied trumpet at Ohio State University with Pharez Whitted and Derrick Gardner, then continued his studies at Rutgers with the legendary trumpeter William Fielder, whose previous students included Wynton Marsalis, Terence Blanchard, and Terell Stafford. Chubb toured more than 40 cities with the award-winning Broadway show Jersey Boys between 2006 and 2011, having recently left to concentrate on the “hyper-creative music laboratory that is New Tricks."

“New Tricks has all of the cohesion and assuredness of a working band—something not experienced as often as it once was in jazz," says bassist Christian McBride, a friend and admirer. Saxophonist George Garzone likes the group's “real New York sound—very seasoned and swinging." And in the view of guitarist Dave Stryker, “New Tricks is keeping the music alive with a fresh approach."

The vibrant, uncompromising music on New Tricks' Alternate Side is very much about using tradition as a springboard into the future of jazz. “Working with Ted and making this project go has been so fulfilling and enlightening for me," Lee says. “I've wanted a push like this in my career ever since the beginning, and I've just never had the kind of support and camaraderie that I now have with Ted, Kellen, and Shawn."