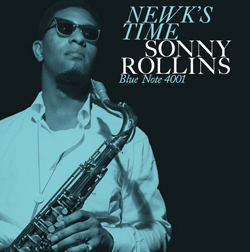 Possibly the premier US remastering shop, Music Matters continues to reissue Blue Note albums of the 1950s and 1960s on premium 180 gram, 45rpm vinyl. These recordings are at the heart of the jazz canon and should be heard by any serious student of the music. Now, one of the finest performances in the Blue Note catalogue, tenor saxophonist Sonny Rollins' 1957 date Newk's Time, has hit the street.

Newk's Time features some of Rollins' most robust playing of the era. Big and bold, self-assured and powerful, Rollins underscores his mastery of the tenor on every track. Backed by some of the finest players of the day, even a war-horse like "Surrey With A Fringe On Top" sounds invitingly fresh. Rollins contributes only one original to the date, "Blues for Philly Joe," but that doesn't prevent him from making every track his own.

Musically the album is impeccable, but as a review of an expensive rerelease, the bigger issue is what's included for the money and whether or not it's worth the considerable coin. The album comes dressed in a beautiful gatefold package, faithful to the original jacket but with the addition of extra session photos taken by Blue Note's ever-vigilant Francis Wolff. This set is nothing if not deluxe, as well it should be at $50 a copy. That's a lot of money for 34 minutes of music, but this Music Matters pressing may well be the definitive edition of this 54 year old classic. The sound quality is forehead-smacking, jaw-dropping-in-disbelief good. It's a hi-fi cliché to pronounce that every new reissue reveals previously unheard levels of detail, but it's not hyperbole when Music Matters is involved.

Recording engineer Rudy Van Gelder (pictured below with Blue Note's Alfred Lion on right) did not have an actual studio in his early days, so he recorded the finest jazz musicians, including Rollins, in his parent's living room in Hackensack, New Jersey. Given the esteem in which these recordings are held, such a quaint recording setup seems inconceivably humble in 2011, but that's exactly how it was done. The sessions were recorded live to two-track tape, with no baffling of the microphones and no overdubbing for corrections. The music on the tapes is exactly what was played in Van Gelder's living room.

The remastering process is complicated and painstaking. Music Matters is fortunate to have access to the original Van Gelder master tapes that they use to cut new stampers to press the vinyl. No additional compression, equalization or studio trickery is added to the mix, and nothing more or less than what's on the tape ends up on the records. Perhaps the most amazing thing: listening to these albums is never more than three steps away from the original recording session.

That attention to detail yields some of the highest quality vinyl available today. Drop a needle into the leading dead wax and hear absolutely nothing: no ticks; no pops; no pings; just silence. These are seriously clean pressings. Drummer Philly Joe Jones' cymbals emerge out of the blackness on the left. (Oddly, the most recent CD reissue had the drums on the right, and yes, all of the cables were checked for inversion). Rollins' horn follows with a huge, smooth blast, full of overtones and colors that simply don't exist in the digital format. Doug Watkins' bass sounds physically present, and, in a minor miracle for a 1950s Van Gelder recording, the piano in the hands of Wynton Kelly sounds clear and life sized. The overall sound is nothing short of spectacular.

But the recordings themselves are not perfect. A glitch emerges about halfway into the first track, "Tune Up," when the cymbals start to fade in and out of the left channel creating an audible dead space. The effect appears periodically throughout the album and was initially disconcerting. It doesn't detract from the performance, and isn't overly obtrusive, but it's definitely an anomaly on such a meticulous remastering job.

Further investigation, it seemed, was in order. A few phone calls led to Ron Rambach, the owner of Music Matters, who was generous enough to provide some very illuminating insights. As it turns out, the Music Matters team was cautioned against trying to remaster Newk's Time because the original tapes were believed to have been compromised. Rambach explains, "The session comes, and sure enough, there on the Newk's Time masters are dire looking warnings about 'severe tape drop outs' all over the outer box and inner notes." On the vinyl, this translates to sections on almost every track where the cymbals distinctly disappear from the mix.

The explanation turns out to be a fascinating bit of recording history. As Rambach and mastering guru Kevin Grey listened to the tape, they concluded that what they were hearing wasn't tape drop out, but rather, the engineer adjusting the mix during the live session. Van Gelder was forced to actively manage the recording levels—in real time during recording—because Rollins' kept strolling away from his microphone. On the record, the result is limited to hearing the horn moving around a little in center stage, but the relative stability of the horn comes at the periodic expense of the percussion. Without an explanation—and especially on such an expensive package—this effect could be alarming, but once understood it's a terrific insight into Rollins' studio work, as well as Van Gelder's challenge in recording him.

Strangely, the 2004 EMI CD remaster does not share this fade-out anomaly, but based on Rambach's description of the dire warnings on the tape box, as well as Music Matters' track record handling these vintage reels, it seems plausible that the quirk is indeed a feature of the original master tapes. Properly forewarned, the power of the performance and the overall sound quality will still leave all but the most hard-core audiophiles quite satisfied. The understanding that Rollins was wandering around as he played just brings the reality of the performance into tighter focus.

All of which gets back to the question: is this reissue of Newk's Time worth the steep price? The music can be enjoyed in any format, and even a lowly MP3 will convey the basic information. But the purpose of these Music Matters pressings is to do much more than simply deliver the tunes: the records convey the scale of the instruments; the physical presence of the musicians; and the boundaries of the room they were recorded in. The delivery of the ambient information is the difference between simply hearing the music and truly experiencing the performance. The details are revelatory.

Of course, recovering all the information in these grooves requires a decent turntable, cartridge, and associated equipment, but with the necessary gear the experience is amazing. Assessing this reissue for the quality of the pressing and its insight into the recording process, Newk's Time is an unqualified success.

Tune Up; Asiatic Blues; Wonderful! Wonderful!; The Surrey With The Fringe On Top; Blues For Philly Joe; Namely You.