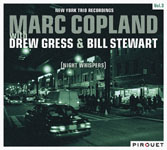 Some artists are so consistent that it's difficult to tag one release as better than another. Still, every now and then they manage to release career milestones that stand above the rest. Pianist Marc Copland's Time Within Time (HATology, 2005) is one such watershed—a sublime solo piano session that transcends mere virtuosity and digs so deeply into its repertoire that it's almost impossible not to feel fully a part the experience rather than just an innocent bystander.

Night Whispers, the final volume in Copland's New York Trio Recordings series, also including Vol. 1: Modinha (Pirouet, 2006) and Vol. 2: Voices (Pirouet, 2007), is more than just the best of the bunch; it leverages Copland's unique strengths while avoiding a comfort zone that could entice the pianist and his trio to take the road well-traveled. Instead, Copland, bassist Drew Gress, and drummer Bill Stewart explore unexpected twists and turns while remaining true to Copland's introspective nature, simmering with a rare underlying heat that occasionally bursts to a boil.

One obvious reason for Night Whispers' distinction is the substitution of Stewart for Jochen Rueckert, the drummer in Copland's longstanding trio. On this set of Copland, Gress, and Stewart originals, and standards including Miles Davis' "So What," Julie Styne's "I Fall in Love Too Easily," and Johnny Mandel's "Emily," the flexible and uniquely melodic drummer has rarely sounded better. Copland's "The Bell Tolls" begins in melancholy abstraction, but following Gress' lyrical solo Stewart begins turning up the heat during Copland's impressionistic turn, leading to a drum solo that perfectly meshes empathic responsiveness with reckless abandon, pushing the group to a level of energy rarely heard from the Copland/Gress/Rueckert trio.

Copland's title track is surprisingly upbeat despite its harmonic abstrusity and contrapuntal melodicism, as Stewart's turbulent but firm support drives the pianist to an uncharacteristically heated solo, all the while retaining a touch so delicate that it almost demands leaning forward into the music to catch it all. "Scattered Leaves" also simmers with smoldering energy, an altered blues not unlike Voices' "River's Run," with marvelously indirect interplay between Copland, Gress, and Stewart. Gress' dark-hued tone poem, "Like It Never Was," revolves around a gently explored, repetitive motif, as does Stewart's "Space Acres," though the latter does gradually pick up a head of steam.

Copland often divides his albums into sections through exploring multiple takes of a tune, and here it's three solo readings of "Emily": softly abstract ("Take One"); song-like and literal ("Take Three"); and near stream-of-consciousness ("Take Two").

Copland's ties to the tradition are undeniable, but he's rarely swung as hard as he does here on "So What" where, once its familiar theme is dispensed with, it becomes an improvisational free-for-all that remains structured, even as it's clear there's little holding the trio back.

It's rare that a single personnel change so significantly alters a group's dynamic and creativity, but Stewart makes Night Whispers an outstanding and definitive trio disc for Copland. On the merits of this seminal set, it would be almost criminal were this group to be but a one-time affair.