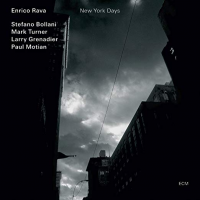 In assessing Enrico Rava's lengthy career, while it is clear that he is still reaching for the unattainable, in recent years the Italian trumpeter's context has been considerably more centrist. Easy Living (ECM, 2004) and The Words and the Days (ECM, 2007) were undeniably mainstream, albeit with an unmistakable European and, at times, Mediterranean bent. New York Days teams Rava and pianist Stefano Bollani—last heard in duet on the marvelous The Third Man (ECM, 2008)—together with perennially underrated tenor saxophonist Mark Turner, increasingly ubiquitous bassist FLY and drum icon Paul Motian for a set of nine originals and two free improvisations that, like The Third Man combine innate lyricism and swing with some of Rava's freest playing in years.

Whether suggested by Rava or ECM owner/producer Manfred Eicher, it's an inspired grouping. Motian collaborated with Rava and Bollani on TATI (ECM, 2005), though that was a more compositionally democratic affair. Here, with the exception of the two improvs, it's all Rava, and the trumpeter's writing brings the set a greater stylistic focus. The material does have breadth, however, ranging from the dark-hued, European impressionism of "Interiors" to "Thank You, Come Again," which leans more to the west side of the Atlantic in its harmonic approach and gentle swing.

Elsewhere, however, there are unexpected detours. "Outsider" begins with Grenadier's frenetic bass line, setting the stage for Bollani's oblique harmonies and Motian's trademark implicitness. Rava retains his own unmistakable melodicism while reaching for abstract heights as Grenadier, Bollani and Motian regularly break down and regroup, with Rava leaving space for Turner to demonstrate the kind of immediacy that's made him a highly respected figure amongst musicians—if not a hugely popular figure amongst the jazz listening populace. Wayne Shorter-like in his cerebralism and ability to make a single note mean everything, he darts in and out, punctuating and delivering lean, lithe lines that set up a brief but unrelenting duet between Bollani and Motian where the excitement is ratcheted up, with Grenadier only reentering in time for a brief recapitulation of the piece's high velocity theme.

How well these artists work together— intersecting in the past but never together as a quintet (e.g. TATI, Turner with Grenadier in Fly; Grenadier with Motian's Trio 2000+One)—is, perhaps, best heard on the two improvisations. Despite the freedom of "Outsider," "Improvisation I" is a classic case of pulling form from the ether, as the quintet gradually coalesces, over the course of four spare minutes, to create a clear compositional kernel. "Improvisation II" is starker still, but half-way through Bollani begins to bring form, leading to a remarkable series of cascading lines where the quintet magically connects.

Throughout, Turner's interactions with Rava at an equally deep level are further evidence of his remarkable talent. As the entire quintet finds new ways to coincidentally respect and reject tradition, New York Days emerges early in 2009 as one of Rava's richest and most rewarding showings since he returned to the label in 2003.