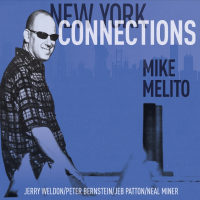 It's somewhat misleading to summarize Mike Melito's New York Connections by dropping a few names of past masters for credibility's sake, applauding him for preserving the essence of hard bop designs from the 50s and 60s, and emphasizing just how effective he is at forging ties to these avenues of the music. Though all of these factors are germane, they're only a small part of the whole tale. The Rochester, NY area drummer and a band of excellent New York City players utilize the tradition as a point of departure in making music that is superbly executed and decidedly present-centered. Giving the disc the consideration it deserves without reflexively looking backward begins with recognizing an unusually cohesive small group sound. Every track contains performances that don't demand attention as much as they make sense as individual accomplishments in the context of the band. Of course, each player deserves his due, but only while keeping in mind that everyone else is pitching in at the same time to make absorbing things happen.

A good place to start is the alliance of Melito and bassist Neal Miner. Generally speaking, they swing in a manner that, unfortunately, is rapidly becoming passé; that is, offering a straightforward beat both taut and relaxed, as well as tactfully responding to the soloists without getting in anyone's way. Throughout the up tempo "Up Over and Out," the slow-to-middling paced "Theme For Ernie," a ballad, "I Wished I Knew," and the brisk bossa, "Indian Summer," their stimulating good taste always puts the music in a positive place. Miner, thankfully, is well positioned in the mix, the better to hear his flawless intonation, smart note choices and bedrock time. For the most part, dynamically speaking, Melito plays a shade under the bassist's line, nimbly managing snare and bass drum accents that provide a pleasant jolt. It's also good to hear the drummer's contribution to the heads, most notably on "Jet Stream," and "Blues Okura," where his rhythms around the kit correspond to the songs' melodies.

"I Wished I Knew" is notable for the ballad wisdom of Jerry Weldon. The tenor saxophonist knows that leaving things out and allowing the music to breathe has a profound effect on shaping a melody as well as an improvised line. These are things he successfully employs in various degrees during his solos on the record. While Melito and Miner nip at his heels, pianist Jeb Patton's left and right hands collide and vie for attention—yet maintain a sense of balance—throughout a bruising "Up Over and Out" solo that's attentive to form and development. Guitarist Peter Bernstein devises a somewhat idiosyncratic take on the 1960s pop song, "Wives and Lovers," waiting a split second to drop a note in an unexpected place, or galloping through a phrase, all the while taking care not to muss up the song's jaunty quality.

New York Connections is a convincing repudiation of the belief that you can't put a fresh spin on hard bop. Recommended.