BY GLENN ASTARITA
September 8, 2009
Sign in to view read count 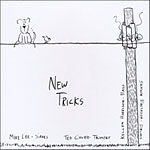 New Jersey resident, veteran educator, group leader and session ace Mike Lee pulls some new tricks out of an old bag on this 2009 quartet date with co-leader/trumpeter Ted Chubb. In the liners, Lee mentions that this aggregation found its origins via recurring jam sessions in his basement. They're a young and noble bunch of jazz warriors ready for battle. The proof lies within this hip session, based on crisp arrangements, resonant soloing and a tight-knit line of attack.

The band benefits from solid material, designed upon memorable hooks and an underlying impression of buoyancy. Lee and Chubb trade the customary fours while spicing matters up with dynamic unison choruses and odd-metered detours. And it's a liberal affair, as the musicians' generate some high-heat when appropriate.

The quartet injects ample doses of pop and sizzle, but counterbalances its hard-hitting gait with memorably melodic themes and variances in hue and pitch. The frontline also executes a literal reading of Charlie Parker's classic bop piece, "Ah Leu Cha," but fuses its individual voices into the bridge with soaring exchanges and heated soloing.

With gently rolling segments and perky excursions, the band covers lots of ground, including a smoky late night ballad that gains steam amid interweaving motifs on "1919 (dedicated to Donald Jacobus)." The quartet doesn't set its sights on reinventing the jazz vernacular. Instead, it's largely about a group-centric ethic, aided by a solid and a diverse track mix. Add ardent soloing to the grand schema, and there lies the bountiful fruit.