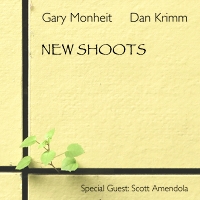 New Shoots features eight original tracks, all of which are composed either by Krimm or Monheit. The two share a compositional vision, which lends a great unity to the album. Their style of jazz is modern, drawing influences from the pioneers of modality, Latin American Montuno vamps, and the open, airy piano voicing of Bill Evans. The songs are relatively compact, most within the 5-6 minute range.

"Misspoke," a Monheit composition, features a two chord Phrygian vamp, reminiscent of "Night in Tunisia." The song is characterized by modality, quartal harmonies, jabbing syncopations, and a memorable melody full of unexpected turns. Amendola's drumming is frenetic in the best way, never predictable, but holds the entire ensemble together.

"Awakening" is a tune by Krimm that contrasts in character, but maintains many of the defining elements found throughout the album. In this case, the tune is a floating ballad in the Lydian mode, giving a sense of serenity and wonder as Krimm's bass solos emerge from the polyrhythmic harmonic background.

"Rambling Green," by Monheit, features a rolling ostinato bass line during the head, which drive the piano forward. The song is a bright Mixolydian tune that has the drive and energy akin to a samba. The longest track on the album, it also features an Amendola drum solo and some of Krimm and Monheit finest soloing on New Shoots.

Monheit's "Blues for Terri" is a departure from the modal characteristic found elsewhere on the album. Instead, it is a rollicking gospel-tinged number. The melody is heavy on the blues sensibilities, with blue notes and the appropriate phrasing. The track features one of Monheit's best solos on the album, unique because of its blues context.

New Shoots is a good example of the jazz available outside the Great American Songbook and jazz classics. The production quality is good, the compositions are unique and interesting, and the band is in fine form throughout.

About Gary Monheit and Dan Krimm