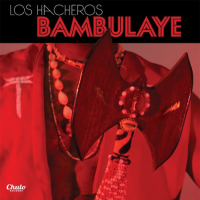 New York City is the birthplace of salsa, a rhythmic combination of traditional Cuban son and Puerto Rican dance music, defined by a syncopated five stroke clave (pattern) beat. Developing during the sixties, it's popularity rose to international prominence during the early seventies. Through time, as the music became more homogenized, the term "salsa gorda," has come to identify the authentic structure and intention of those who still perform it as no-nonsense dance music. From the heart of Brooklyn, Los Hacheros play streetwise salsa gorda on Bambulaye, determined to keep the ritual alive, and the dancers swaying.

This band has a vintage ensemble setup, the piano supplanted by the Cuban tres guitar—3 pairs of strings each tuned to the same pitch—expertly played by Jacob Plasse, who also serves as producer. The additional string intonations of violinist Eddie Venegas, coupled with the flute of Itai Kriss, provides them a throwback sound of the inventive charanga bands from Cuba. The requisite bass and percussion foundation sets the momentum from which the sonero (lead vocalist) Hector "Papote" Hernandez, is able to improvise his refrains.

The title track sets the mood with a stinging mambo, the nucleus for much of the arrangements in Latin music, and principle motivator of dancers. The humorous lyrics on "Pintate," an energetic son montuno, are indicative of how the main objective is entertainment. "Esta Noche Corazón," is a classic bolero composed by the legendary singer Beny Moré, from the golden age of Cuban music. It's transformed into a sensual guaracha, with an extended opening lamentation leading into a cadenced midsection, as the chorus sets up the soneo (call and response) of the lovelorn singer. Contemporary social situations are brought to light in "Justicia," an inquisitive guaguanco, dealing with how injustice is prevalent in most inner city communities.

The influence of Puerto Rico is apparent on "Querida Madre," with its strong jibaro (folkloric) connotation, and the distinctive bomba beat of the island is the foundation for "Bomba De Loiza," a tale of the drums traveling across the island, and north to New York. Eddie Venegas, being able to double on trombone, is an added treat on this track, as well as others, giving them a brassier sound when needed. "Las Nieves De Brooklyn," is based around the Puerto Rican danza, with roots in Spanish ballroom dancing, reminiscent of the waltz. A danza is difficult to execute properly, and the violin flute interplay here is worth mentioning.

The Cuban timba rhythm is highlighted on "Timbalaye," a Santeria tinged chant given a modern rumba arrangement, closing with a vocal and drum incantation. The spontaneous jam sessions (descargas) are an essential component of Afro-Cuban music, and "Descarga Para Abe," is performed with all the required instrumental soloing, the chorus challenging the players, including the vocalist. It is an opportunity for everyone step up and show what they have, all done while keeping impeccable time.

In a further commitment to their cause, Los Hacheros recorded this in a live studio setting direct to analog tape. There is a vital sense of urgency in the production process that transmits into realistic interpretations, with all the influences and nuances coming through. This is dance music for the people, and from the streets, and should be performed as such, without excessive adornments, as they do it here.