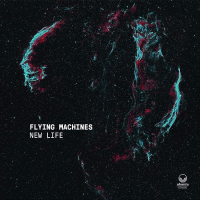 It takes barely a couple of plays but then the main hook line of Alex Munk's stonking title track grabs you and won't let go. This is very much in the vein of mid-period Frank Zappa with Munk's guitar wired to the extreme end of the jazz/metal spectrum. But it's not all sound and fury, as the sultry "Moondust" attests. On the short "Prelude To Elation" and the eight minute "Elation," Munk contributes some ethereal wordless vocals, but the main event is still his inventive, skillful guitar work, rapidly plying his notes up and down the fretboard. Meanwhile, Matt Robinson can be heard both in lithe soloing and melodic support.

Three tracks, "Blink," "Standing Still" and "Bullet Train" are collective improvisations or, as modestly expressed in the words on the CD's back cover, "made by the band on the fly," although they certainly don't sound like it. Beginning in semi-acoustic mode, "Kilter" is possessed of an attractive, almost folky sensibility. "Fall In" is led by Munk's electric guitar head, and although not quite as staccato as the opening track, is nevertheless, keenly attractive. The elegiac "Take Time" benefits from Conor Chaplin's subtle bass solo and the piece culminates in a crescendo of tonal colour.

It's gratifying that the London-based Flying Machines are flying again with their follow-up to 2016's debut Flying Machines. But even better, primary composer and guitarist Alex Munk has lost none of his stylish panache or visceral attack, and his compositions are as hugely appealing as ever.