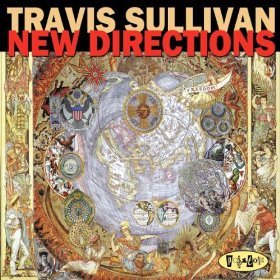 Saxophonist Travis Sullivan has received lots of coverage for the music he creates with his Björkestra, but the success of that band is a double-edged sword. While following the musical pathways set forth by his Icelandic muse has helped the saxophonist expand his audience, it also temporarily suppressed his own musical personality. With New Directions, Sullivan steps out of the shadow of Björk and back into the light of his own creations.

For this ten-song program, Sullivan supplies eight originals that showcase his gleaming tone and melodic sensibilities, while also testifying to his varied musical interests. He paints bright melodies against the contrast of dark bass lines ("Jamia's Dance") and powers through funky, odd-metered workouts with ease ("Hidden Agenda"), but he also shows comfort soloing over rhythmic terrain that shifts from aggressive, driving swing to Latin-leaning grooves ("Tuneology"). While the majority of Sullivan's pieces are grounded by a firm sense of rhythm, "Autumn In N.H" is a notable exception. This piece opens with Mike Eckroth's wistful piano work, but the band eventually arrives in a gauzy musical atmosphere that allows for some interesting interplay and dynamic development.

While Sullivan only tackles two covers, his choices reflect the eclecticism found within his own work. He performs "Spring Is Here"—written by Richard Rodgers and Lorenz Hart—and fills it with noir-ish notions. The rhythm section provides some appropriately malleable accompaniment and Sullivan caps off the performance with a confident cadenza. A standard of a different sort, a popular '80s pop confection in this case, is reworked to suit Sullivan's own vision. On "Everybody Wants To Rule The World," bassist Marco Panascia's frisky bass work provides direction early on, but Sullivan's soloing eventually becomes the focal point. While drummer Brian Fishler powers the quartet through various styles of music, his solo star turn is saved for the final number. The title track finds Fishler soloing over a funky vamp and dissecting the time like a skilled surgeon with sticks, helping to end this enjoyable album on an energetic note.