By DAN BILAWSKY
October 4, 2014
Sign in to view read count 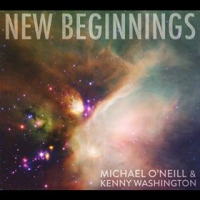 Multi-reedist Michael O'Neill gets top billing here, but there's little doubt that the star attraction is singer Kenny Washington, one of the most under-recognized vocal talents operating today. O'Neill, perhaps Washington's greatest supporter and promoter, doesn't hide that fact when discussing the music presented here: he notes that "the arrangements are unique settings, and Kenny's the jewel."

Washington, a stunning talent who's appeared on record with O'Neill on more than one occasion, recorded and toured with vibraphonist Joe Locke, and worked with drummer Tommy Igoe's Groove Conspiracy, isn't as well-known as he should be, but he's partly to blame for that problem. Washington has marginalized himself to some extent. He's only released one album under his own name—Live At Anna's Jazz Island (Self Produced, 2008)—so he's suffered from a bit of a visibility problem. But those who've seen him live, heard his dazzling performances on Locke's For The Love Of You (E1 Entertainment, 2010), or followed his work are well aware of his skills.

On New Beginnings, O'Neill and Washington work with a strong group that includes one of Locke's closest associates—über-pianist Geoffrey Keezer. Together, O'Neill, Washington, Keezer, and the rest of the crew work through a program of smartly arranged classics. The band works tight and tasty riffs into the fabric of these songs, re-contextualizes the music via groove facelifts and harmonic twists, and parts the seas enough for Washington to walk through. To hear him on a stately "Oh What A Beautiful Morning," a stripped-and-mellowed "Fly Me To The Moon," an intriguing "It Ain't Necessarily So," and a taut-and-tasty "A Night In Tunisia" is to hear the perfect blend of soul and sophistication. O'Neill, trumpeter Erik Jekabson, and Keezer also get plenty of space to shine, but all ears are on Washington when he's in the picture.

Some may view New Beginnings as something of a reboot for the O'Neill-Washington partnership, as it comes seven years after their previous recording collaboration, but others may simply see it as a continuation of their ever-evolving musical relationship. However you look at it, it remains a beautiful recording that rightly shines a light on vocalist Kenny Washington.

A Night In Tunisia; On Green Dolphin Street; Stella By Starlight; Creation Of The Universe; It Ain't Necessarily So; Fly Me To The Moon; All The Things You Are; Oh What A Beautiful Morning; The Surrey With The Fringe On Top; Dinah; Nomali.