ReDiviDeR: Never Odd or EveN

By Ian Patterson
January 22, 2012
Sign in to view read count 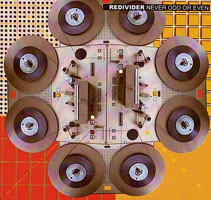 ReDiviDeR was born in 2007, when drummer Matthew Jacobson gathered some of Ireland's finest creative musicians to give voice to his compositions. Its debut, recorded live, has an undeniably visceral impact. Jacobson's compositions are like fine sketches around which the musicians add their own bold colors, seeking collective form and harmony. Improvisation of a post-modern and thoroughly urban bent is at the root of the music. Eschewing chords and conventional jazz rhythms, ReDiviDeR references the broad aesthetic of innovators like alto saxophonists Ornette Coleman and Steve Coleman. But it's also highly disciplined, and embraces hooks, melody and quite refined harmony and counterpoint. This is free jazz which grooves and sings.

Jacobson's fractured, shifting time meters mingle with punchy brass and bass riffs on "Riot Peace." Alto saxophonist Nick Roth—a mainstay of progressive Dublin bands Tarab and Yurodny—tears the paint off the walls with searing playing, while bassist Derek Whyte and trombonist Colm O'Hara's grooves rumble underneath. Peace breaks out in a strangely meditative, subdued passage, before the riot kicks off again, with squonking sax and rattling drums. It's the freest track, and yet there are plenty of signposts to follow, in particular the repetitive bass patterns which anchor the group.

Sweetly-humming bass ostinatos, subtly dynamic drumming and interweaving sax and trombone feature throughout, though no two tracks sound the same. "The End is the Best Part" grows from very lyrical sax and trombone beginnings to a busy workout characterized by a singular melodic, rhythmic and harmonic DNA not dissimilar to Bill Bruford's Earthworks. A distinctly Indian flavor colors Whyte's detuned-bass intro to "In Aid Of," an effect enhanced by faint bells. Slurred bass drones in the background as Whyte stretches out on a captivating extended solo, amid short sax exclamations and evermore imposing drumming. Sax and trombone trade and overlap in mounting waves which crash abruptly.

Whispering intimacy coexists with coiled tension on "Sweet Time," epitomized by Roth's progressively more ebullient solo. Everyone parks up to allow Jacobson the spotlight in an African-colored solo. Then, sax and trombone harmonize soothingly, juxtaposed against lively bass and drums, the voices combining with the graceful power of South African gospel music. A sci-fi abstraction initially colors "Kann Nicht Entscheiden" with ghostly crying cymbals and distant-sounding trombone and sax, but the explorative Whyte ultimately pulls the group into an earthier realm, though one not without its surprises. A great sax and drum intro starts the indefinable "Coming or Going," which also boasts a good impersonation of a bass played in thick treacle.

On the curiously lyrical "Royal Gardens," sax buzzes like a bee, brushes flitter like bird wings, cymbals sing like the rising wind and mallets rumble like darkening skies. On "And Much"—another composition whose form is as elusive as it is engaging—the trombone mimics a grumbling buzz-saw, though the climax delivers a gut blow. The multilayered "Ye, I Jar Ivy" evokes bassist Charles Mingus's blues, purring and roaring majestically.

An impressive debut, ReDiviDeR's stirring and original music marks it out as a band to watch out for.

Riot Peace; The End is the Best Part; In Aid of; Sweet Time; Kann Nicht Entscheiden; Coming or Going; Royal Gardens; And Much; Ye, I Jar Ivy.