By Eyal Hareuveni
January 22, 2012
Sign in to view read count 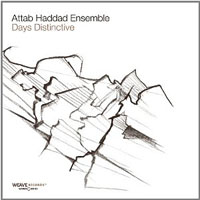 It is rare to find a musician who, on his debut recording, is already confirming his stature as one of best ones in his field. London-based/Iraqi-descended oudist Attab Haddad is such a musician, honing his knowledge of the traditional Arabic legacy with oud masters including Iraqi Ahmed Mukhtar and Egyptians Nihad El-Sayed and Nasseer Shamma. He is also a member of violinist Sabina Rakcheyeva's neo-classical ensemble and a founding member of the flamenco-Arabic-Indian group Alcazaba.

But it is his innovative new attitude to the oud that marks him along other great contemporary players such as Anouar Brahem and Rahim Alhaj, Haddad's complete mastery of the instrument—with a poetic personal musical language and natural sense of openness— organically placing it into new genres such as chamber jazz, flamenco and contemporary music. This comes together with strong and fresh compositions, wise arrangements that leave enough room for all the melodies to blossom, and the wisdom to find the right musicians to enhance Haddad's vibrant musical vision.

This recording features Haddad's quintet, augmented with many guest players. Haddad begins "Awakening" with a beautiful solo that patiently introduces his tight and passionate ensemble, while ornamenting and wisely nurturing his flowing musical ideas. Even though the music relies on an Arabic scales, it has its own sense of swing and new music courtesy of cellist Naomi Wright's exquisite playing. On "Looking at the Wind" and "Por Que? No Se!," Haddad's poetic playing lightly references flamenco music while introducing the theme, and later through the gentle interplay with Wright and flutist Philippe Barnes. The title piece—in both its studio recording and longer live version—is full of drama, adventure and humor, and displays Haddad's skills as a sensitive storyteller in full control of this elaborate tale's ingredients and its progression.

Together with Alcazaba partner, flamenco guitarist Ramon Ruiz, Haddad presents an enchanting playful melody on "Por Tangos," with leisurely yet virtuosic playing. Later, the ensemble revisits Haddad's Alcazaba composition, "Aire Del Oud," with joyful passion. Based on Turkish traditionalism, "Longa-esque" provides an excellent opportunity for Haddad and his ensemble to bridge the original's sophistication with an update of bold rhythmic ideas. Two friends from Rakcheyeva's ensemble—the uniquely expressive leader and pianist Kit Downes— guest on Haddad's "Clock," originally written for that ensemble and, here, emphasizing the timeless quality of the oudist's melodies.

2012 has only begun but Days Distinctive is already a strong contender for this year's list of best releases.