Rahim AlHaj, virtuoso oud musician and composer, was born in Baghdad, Iraq and began playing the oud (the grandfather of all stringed instruments) at age nine. Early on, it was evident that he had a remarkable talent for playing the oud. Mr. Alhaj studied under the renowned Munir Bashir, considered by many to be the greatest oud player ever, and Salim Abdul Kareem, at the Institute of Music in Baghdad, Iraq. Mr. AlHaj won various awards at the Conservatory and graduated in 1990 with a diploma in composition. He holds a degree in Arabic Literature from Mustunsariya University in Baghdad. In 1991, after the first Gulf War, Mr. AlHaj was forced to leave Iraq due to his activism against the Saddam Hussein regime and began his life in Jordan and Syria. He moved to the US in 2000 as a political refugee and has resided in Albuquerque, NM ever since.

Rahim AlHaj has performed hundreds of concerts all over the world, on tour with Munir Bashir, as well as solo and with his string quartet, including in the Middle East, Europe and the United States. Rahim's music delicately combines traditional Iraqi maqams with contemporary styling and influence. His compositions evoke the experience of exile from his homeland and of new beginnings in his adopted country. His pieces establish new concepts without altering the foundation of the traditional "Iraqi School of Oud”.

Mr. AlHaj has released five CDs. His latest, Home Again (UR Music), is a tour de force of touching and evocative original compositions portraying his trip to Iraq after 13 years in exile. When the Soul is Settled: Music of Iraq (Smithsonian Folkways Recordings) garnered a 2008 Grammy nomination in the Best Traditional World Music Recording category. Don Heckman, reviewing the CD for the Los Angeles Times, wrote: "Alhaj's spontaneous inventions are constantly fascinating--a convincing affirmation of the rich culture of an embattled area of the world." (January 7, 2007). His earlier recordings include Friendship: Oud and Sadaqa String Quartet (UR Music 2005), a unique East and West musical collaboration, The Second Baghdad (2002) and Iraqi Music in a Time of War (2003). Rahim's next release, a duet recording with sarod master Ustad Amjad Ali Khan, will be released in late 2008/early 2009 on UR Music.

Rahim won the Albuquerque Arts Alliance Bravo Award 2003 for Excellence in Music and was dubbed: "The Prophet with an Oud" by a music reviewer at the College of William and Mary.

"I feel lucky to have heard Rahim Alhaj. His music is beautiful, mysterious, and powerful. I've never heard anything like it. He has his own voice--his own sound. As the world becomes more and more complicated, confusing, and frightening, there is one thing I am certain of--Music is good. Music can bring people together. Music has power. Music heals. What Rahim is doing is important. I hope many people will have the chance to hear his new album, Home Again, made up of his own very personal compositions. Listen. He's an inspiration." --Bill Frisell 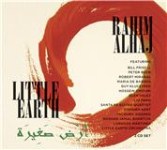 All About Jazz musician pages are maintained by musicians, publicists and trusted members like you. Interested? Tell us why you would like to improve the Rahim Alhaj musician page.