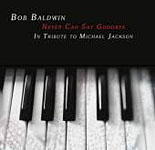 The connection between Michael Jackson and jazz seems tentative to non-existent until it's factored in he reached his greatest heights as an artist when collaborating with producer/arranger extraordinaire Quincy Jones. The unlikely pairing of Jackson and Jones brought out a degree of professionalism, maturity and poise in the late King of Pop that did not fully emerge when he was the precocious young boy performing with his brothers in the Jackson Five. Had the Jackson Five worked with Jones, Jackson might never have gone mushy with ballads such as "Ben," where he lovingly crooned to a rat.

Pianist and multi-instrumentalist Bob Baldwin previously covered Jackson's "Never Can Say Goodbye" and "I Wanna Be Where You Are," and was as shaken as the rest of the world by the music icon's untimely death in 2009. Securing the cooperation of the family and estate of Michael Jackson, Never Can Say Goodbye: A Tribute to Michael Jackson is the first officially authorized jazz homage to this legendary artist.

Tribute albums are a tricky proposition. Jackson vocals stylings are indelibly stamped into the minds of millions, and can't be improved upon. Wisely, Baldwin doesn't try to fix what isn't broken by attempting to radically rework Jackson's classic songs. The material (except for two songs penned by Baldwin) cover the classic Motown hits of the Jackson Five ("I'll Be There, "Never Can Say Goodbye," "I Wanna Be Where You Are") and several selections from Off the Wall (Epic, 1979), Bad (Epic, 1987) and Thriller (Epic, 1982), though those albums' biggest hits— "Beat It," "Billie Jean" and "Thriller"—are curiously missing.

Baldwin interprets Jackson in a pretty straightforward and direct manner, with few frills or unnecessary flourishes. Another artist might have overly embellished the material with strings, horns, a battery of overdubbed keyboards, vocalists and other trappings; instead, Baldwin lets the music do the talking, and guest appearances by guitarists Steve Oliver, Chieli Minnucci and Chuck Loeb, along with trumpeter Joey Sommerville, add subtle but not showy contributions. Loeb—the newly recruited replacement for Larry Carlton in Fourplay —shines especially on "Never Can Say Goodbye."

The two Baldwin originals, "Don't Say Goodbye" and "Prodigious," are respectful homage, but are merely okay. It would have been preferable had Baldwin covered some of the post-Bad material, such as "Remember the Time" and "You Are Not Alone" from Dangerous (Epic, 1991), or the underrated "Butterflies" from Invincible. (Epic, 2001).

Still, why quibble over a few omissions from such a vast catalog? Never Can Say Goodbye successfully acknowledges the musical legacy of Michael Jackson, while Baldwin demonstrates that even if you don't like pop music, it can inspire some pretty cool jazz.

Bad; Human Nature; The Girl Is Mine; I Can't Help It; I'll Be There; Prodigious; I Wanna Be Where You Are; The Lady In My Life; Let Me Show You; She's Out of My Life; Don't Say Goodbye; Never Can Say Goodbye.