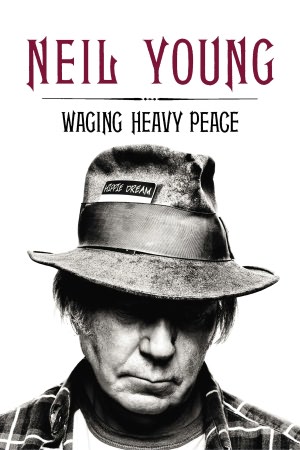 An argument can be made that the three greatest artists in the history of contemporary rock music are Bob Dylan, John Lennon and Neil Young, in no particular order. The most controversial amongst the three would be Young. This of course comes from the fact that Young seems to almost purposely take the path that defies commercial success but it's also a significant part of the reason why he remains so relevant. Where as most rock musicians reflect the time they create in by focusing on making hits, they also become dated when contemporary culture moves into the future and the next generation wants their own identity, their own statement and, yes, their own music. Though rare in rock music, every now and then an artist comes along that creates from a deeper well. And that well is so deeply personal in a creative spiritual sense, that the creativity produced does not reflect a style or genre as much as it does the spirit of the artist.

Waging Heavy Peace is a shining example of just what that means. There may be no other biography that is so closely in tune with the artist, nor an artist that is this in tune with his muse and has the ability to write about it in such a detailed and expressive way. This is not only an inside look into the life of Young but critically important, what is inside the genius of one of the greatest minds in the world of modern art. And at this level, the genre and concept of art disappears. It is the artistic mind in collaboration with the spiritual soul that becomes much greater than the styles that were more than likely identified by record business executives anyway.

The dissatisfaction in reading most biographies is that they carry with it, the expectations and baggage of the writer and it doesn't get inside what is most important, the creative realm of the artist without being condescending. And since US society today has difficulty with art on a deeper and more creative level, the question that begs to be asked is, are we going to accept what is thrown at us from our shallow and greedy culture or are we going to be willing to search and expect something more. Like everything Young does, Waging Heavy Peace flies in the face of expectations and is a direct reflection of the artist in a brutally honest way. It is not trying to sell you anything nor is it trying to please you; it is quite simply a diary into the genius of Neil Young. And on that level, it scores big time.

If there is an area that has a theme, it is the self recognition that time is slowly moving away and the deeply felt appreciation and love he feels for those that have been a part of his life, and continue to be. For someone whose brilliance can sometimes take him to the edge, he has a sensitivity that is deeply gentle and caring and he doesn't make any apologies.

His sons, Zeke and Ben Young, were both born with cerebral palsy and he takes us through the joy and miracle of life being born, through the pain of finding out your child is ill and the joy and happiness of discovering the various levels of love shared with each other. Through Zeke's eyes, he heartbreakingly shares what it must have been like to go through school being so much different from his peers. We learn that a song resisted by his own record company, with words that we could not understand, is an artist expressing the deep sorrow and pain from a father who was not able to understand the words and needs, of his own child.

When Young and his wife Pegi discovered that grade school education wasn't available for kids with such severe disabilities, Pegi would become the brainchild behind the Bridge School, now one of the leading institutions providing education for children with severe disabilities. Young never points out the obvious but it is crystal clear: shouldn't we be able to do more for our disabled children?

He tells us of his love for Buffalo Springfield and Crazy Horse and of the latter he explains, "they are my window to the cosmic world where the music lives and breathes. That is the place where music lives in my soul."

Before Apple's Steve Jobs passed away, Young was in conversation with him on his own proven method to significantly enhance the quality in the way sound and music is made available to us. Two artistic like minds that believed in the power of music and technology, and terribly passionate about it. Who knows where this collaboration may have gone and how we may have benefited. But Young's well inspired project, now called Pono, is captured throughout the book and is still moving forward.

Like Young's compositions, this is not a book that is intended to entertain you. It is a look inside the creative mind of a man who has always fought fiercely for artistic freedom, even when the odds were greatly against him. For great artists, there is no other way. It is part of the essence found in the wisdom of those that have the rare ability to reach down into the darkest depths of their passion and soul. And like his music, Waging Heavy Peace, takes us there.