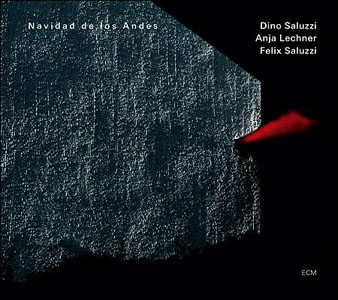 Most musicians work with a wide range of other collaborators over time, but only a precious few become so empathically close as to engender ongoing relationships. It's no surprise that Argentinean bandoneonist Dino Saluzzi has continued to work with his brother, saxophonist/clarinetist Felix, their genetic bond clearly apparent on Dino Saluzzi Group recordings like Juan Condori (ECM, 2006). The bandoneonist's extra-familial bond with German-born cellist Anja Lechner—first, in his collaboration with the Rosamunde Quartette on Kultrum (ECM, 1998), and nearly a decade later on their sublime duo recording, Ojos Negros (ECM, 2007)—is no less profound. Saluzzi's decision to bring all three together for 2010's El Encuentro (ECM)—exploring his ongoing interest in the marriage Argentinean folk tradition with more expansive classical constructs—yielded equally impressive results.

Contrasting El Encuentro's larger sonic palette with The Netherlands' Metropole Orchestra, Navidad de los Andes returns to Ojos Negros' more intimate environs and an equally elemental set of material, almost exclusively composed by Saluzzi. While not suggesting there isn't detailed writing at play, Saluzzi relies more completely on the trio's intrinsic chemistry and shared language, and the glorious combined timbre of this uniquely well-matched set of instruments; the combination of air-driven reeds and bowed strings creating a wondrous single voice, while bandoneon and saxophone conjoin for as seamless a marriage here as Norwegian saxophonist Trygve Seim did with accordionist Frode Haltli on Yeraz (ECM, 2008).

With Felix loosely representing the folk and jazz traditions and Lechner a more classical frame of reference, bandoneonist Dino has formed a perfect trifecta, pushing and pulling what is, at times, an equilateral triangle, at other times, one far more weighted towards specific concerns—and, at times, within the confines of a single composition. "Gabriel Kondor" begins unequivocally in folklore, with Saluzzi's bandoneon alone evoking its cinematic imagery of a small town at the foot of the Andes, but when Lechner enters, the rich tonality of her cello somehow moves the image somewhere less rural. Elsewhere, the medley of Saluzzi's "Candor" with "Soledad," written by singer/songwriter/actor Carlos Gardel—a prominent figure in the history of the tango—wears its heart more decidedly on its sleeve, with Felix's tenor saxophone a mellifluous counterpoint to his brother's unerring sensitivity, while Lechner's quiet sound of fluttering wings and gentle whistles begins "Flora De Tuna" in gentle stasis, its stronger melody gradually culminating in a delicate intertwining of clarinet, cello and bandoneon, ebbing and flowing like a slow journey through a sub-Andean forest.

As Saluzzi and his partners blur the line between form and freedom, Navidad de los Andes' cinematic narrative unveils over the course of an hour, moving from a heightened sense of perception to places where the barest of whispers bears greater import. Astor Piazzolla popularized the bandoneon and brought tango into a modern age, but it's Saluzzi who's given the broader Argentinean tradition a more expansive stylistic purview; only when drawing together his entire ECM discography, beginning with 1983's solo Kultrum, is his importance fully revealed. A significant signpost along the way, Navidad de los Andes is another compelling addition to the septuagenarian bandoneonist's still unfolding oeuvre.