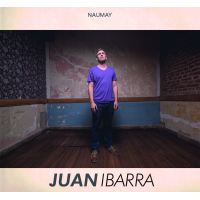 One of the fun parts of listening to jazz musicians from foreign countries is when they combine some of the musical styles of their native land with jazz. Drummer Juan Ibarra is from Uruguay and he mixes a local rhythm called candombe with jazz on his first album. The result is a choppy rhythmic undercurrent that provides a stimulating foundation for stretching out into the direction of musicians like John Coltrane and Chick Corea.

The local rhythms are most noticeable in Ibarra's drumming. His jagged beat-keeping on "Angkor" complements the swelling lyricism of Martin Ibarra's guitar and the wide-open blowing of Gonzalo Levin's tenor nicely. There is also a Spanish twang to Antonio Restuccia's bass on "Indigo," as it solos in the midst of Levin's broad Coltrane-like soprano playing and Ignacio Labrada's nagging piano runs.

Then there are the pieces that give off a cinematic ambiance of desert vistas and cloudless skies similar to the instrumental rock band Calexico. "Pepper Blade" is a quiet theme featuring slide guitar wrapped around an enlarged three-person horn section in addition to surging piano and alto solos. "Oceanos" features a desolate blend of dusty guitar chords and heavy saxophone. On "REM," Ibarra's roiling drums push a tumbling guitar riff along a flowing ensemble rhythm until the music climaxes in a honking bellow of tenor sax.

After the bandleader's drums, Martin Ibarra's guitar carries the most distinctive voice on this set. His solo on the ballad "Te Abrace en la Noche" spotlights his capacity for lilting delicacy before his interaction with Levin's graceful tenor. On "Nair" his flamenco-influenced electric popping is thrown with slippery alto, jittery piano and thrashing drums into a stew that resembles some of Chick Corea's Spanish fusion efforts but adds squealing saxophone and hammering guitar lines to give it more intensity.

The native elements in Juan Ibarra's drumming and writing give his music a distinctive flavor that can result in moments of either hazy ambiance or thrilling power. He has carved a unique sound within the jazz universe.