BY JOHN SHARPE
October 6, 2009
Sign in to view read count 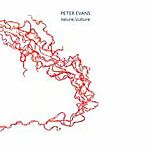 Far from unprecedented, solo trumpet records are still not part of humdrum experience. Since his revelatory debut More is More (psi, 2006), Peter Evans has pitted himself against a widening swathe of improvisers in both North America and Europe, while at the same time affectionately dismantling the jazz tradition with his own Quartet and Moppa Elliott's Mostly Other People Do The Killing. For his second take on the genre, Evans utilizes two different approaches on this double CD: the first disc is recorded with multiple mics to capture breathing and vocalizations as well as trumpet sounds while the second was documented in a manner akin to his solo recitals.

Though featuring the same dazzling array of techniques, this latest bulletin from the solo trumpet coalface adds a greater sense of purpose conveyed through more naturally unfolding structures. Like label boss and mentor Evan Parker, circular breathing is central to Evans' solo oeuvre, enabling him to trade in continuous sonic streams which are more akin to electronics or amplified insects in their freedom from the need to draw breath. Evans piles timbres and textures one atop another in dizzying profusion until all relationship with the traditional musical universe disappears and the listener is cast adrift in a soundworld governed by its own internal logic. Extraordinary control of breath, lungs, embouchure and valves, allied to musical intellect, allows Evans to conjure multiple voices from his trumpet, evoking drones, chirrups, guffaws, swooshes, whistles, even aircraft taking off.

In the liners Evans talks of these pieces telling a story and it is not too farfetched to discern jazz syntax in their development, particularly the 37-minute title track which combines almost conventional trumpet with extended technique in a bravura performance which is astonishing in its conception and delivery.