BY BRUCE LINDSAY
December 2, 2009
Sign in to view read count 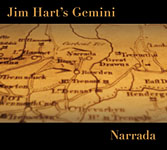 Jim Hart is rapidly establishing himself as one of the top vibes players in jazz: an inventive, adaptable and exciting musician capable of playing in a range of styles and ensembles. As well as being a much sought-after sideman, Hart also leads two bands. The Jim Hart Quartet made its recorded debut on the excellent Words And Music (Woodville Records, 2009). Narrada is the second album from Gemini, the freer, more improvisational of the two bands that Hart leads. Emergence (Loop Records, 2007) was a fine debut for this outfit, but Narrada manages to eclipse it.

Gemini features some of the best and most sought-after young musicians on the British jazz scene. The quartet is tight, enthusiastic, innovative and capable of some stunningly rhythmical interactions. This is not surprising, given that Hart himself is the regular drummer for top flight musicians such as Sir John Dankworth, and saxophonist Ivo Neame is also a talented pianist.

Hart features the marimba as well as the vibes on Narrada. His playing is warm and melodic—he can seemingly weave patterns in and around the other instruments with absolute ease. The first few minutes of "Narrada" showcase this ability exquisitely, the track beginning with Hart, Smith and bassist Jasper Høiby playing a laidback and beautiful theme before Neame enters on alto and the tune moves up in tempo. Hart's gentle shift in style fits perfectly with the changing feel of the piece.

"Crunchy Country," the album's most intriguing tune, opens with a staccato duet between Hart and Smith, also featuring Neame's sparse, free-flowing alto solo and Hart's distinctive bowing of the vibes. The closing "Last of the Leaves" is the most delicate, with Høiby and Hart each contributing affecting solos.

Narrada is yet another example of the breadth of talent on the British jazz scene. The thoughtful invention of Hart's compositions allows all four band members to stretch out, creating an ensemble recording full of atmosphere and originality that further enhances Gemini's reputation.