BY MARTIN LONGLEY
December 3, 2009
Sign in to view read count 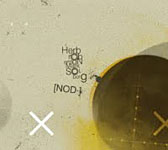 In 2008, Danish guitarist Mark Solborg invited New Jersey trumpeter Herb Robertson to join his quartet. Around the same time, they laid down the tracks for this duo set in Copenhagen. Although Robertson can boast much more of a substantial history within the global sweep of jazz improvisation, this meeting possesses a strong sense of egalitarianism, where Solborg's contribution stands on an equal level. It seems as though Robert Louis Stevenson's poem "The Land Of Nod" had a significant influence on the coalescence of the duo's working concept, not only in terms of giving title ideas, but also in perhaps attempting to identify the mysterious source of musical magic itself.

The first two pieces are slight and brief, as the players pensively discuss a shared sense of sparseness. "NOD" (in this case) stands for Night Observation Device and it's followed by "At Bart Bok's Place," which becomes almost fidgety, as Robertson draws tight squiggles in the air, Solborg dampening his strings but still making soft strikes. The third tune, "Celestials," is smoother, as chords hang diaphanously against lyrical horn statements.

Solborg is capable of great diversity in terms of his amplifier sound. For "Crepuscule In The Land Of Nod" he adopts a very Bill Frisell-ian tone indeed, becoming tender at greater length. By its close, the mantle of dominance has been passed to Robertson, who lets out a vaulting call to conclude. When it comes to "Komplet Komplot (Perfect Conspiracy)," Solborg has morphed into a voice that descends from the angular, clustered strokes of Derek Bailey or Fred Frith. Meanwhile, Robertson is drooling and fluttering into his mouthpiece. Once again, the mood transforms back to restful for "Fabular," inhabiting a spacious vista. Even though this pair is working with deliberately restricted tools, the mere fitting of a trumpet mute or tweaking of an effects dial can completely alter their sonic language.