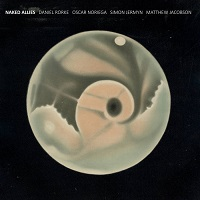 Naked Allies is a two-horn, no-chord quartet, formed in 2018, that bridges the Atlantic. Dublin-based Australian Daniel Rorke and Dubliner Matthew Jacobson made the trek across the big pond in June that year to hook up with Oscar Noriega and electric bassist Simon Jermyn. The Irish connection runs deep, for Dublin was also home to Jermyn, who quit the Irish capital for New York in 2010. Prior to emigrating, Jermyn recorded Hymni (Diatribe Records, 2010), an impressive solo outing that layered bass, guitar, percussion, and electronics. He brings a rock undercurrent to an otherwise contemporary jazz aesthetic, one that weds intricate written parts with unfettered improvisation.

All seven tracks—five by Rorke and two by Jacobson—were recorded in New York's Figure 8 Studios in a single day—a brisk session resulting in takes brimming with energy and spontaneity. Yet the brio in the quartet's play goes hand in hand with closely choreographed interplay. On the title track, for example, the horns' unison motif becomes a tight, three-part melody when Jermyn joins in. This precision contrasts with the freedom in Noriega and Rorke's respective solos, which flow freely over bubbling bass and effervescent drums.

The abstract intro of Jacobson's "I'm Benter" sees both saxophonists stretch out over arhythmic stirrings. As though obeying gravitational pull, however, a solid groove kicks in, pulling tenor and alto into the rhythmic vortex. Thereafter, horns splice melodically and remain inseparable until the punchy ending. Jacobson and Jermyn carve out another absorbing rhythm on "Shitbearder," a slippery number that deals in cyclical motifs, shifting tempi and overlapping saxophone explorations. Resolution comes with the familiar pattern of a unison line.

The pattern of alternating unison lines and solos is upended on a triptych of slower numbers. On the lullaby-esque "BK" Noriega—on bass clarinet—and Rorke fashion caressing lines of harmonic depth over spare bass and rustling percussion. "Dorothy" is almost as leisurely; tenor and alto saxophones relay the melody—following mazy detours-as Jacobson's drums come increasingly to the fore. "Holy Cyan" sees Jacobson switch between brushes and sticks as tenor and alto swap the lead. Both Noriega and Rorke deliver measured solos of great lyricism, but the real beauty lies in the rich harmonics formed by horns and bass, joined in the final breath by Jacobson's sighing cymbals.

Horns return to unison duties on "Malabar," a lively romp founded on Jermyn's funky bass ostinato and Jacobson's driving rhythms. Drums and bass sit out for a New York minute as the horns gently dovetail—a brief pause before the rhythm engine cranks up again, unleashing snappy solos and catchy unison motifs in alternation.

Naked Allies is an impressive debut. Sophisticated, emotive music that gets the juices flowing. Whether the musicians can overcome the constraints of geography and the demands of their multiple projects remains to be seen, but it would be a shame if this classy outing turned out to be a one-off collaboration.