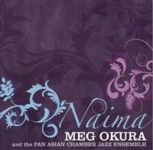 John Coltrane's original recording of "Naima" is extraordinarily beautiful, and it's possible that he never envisioned such a breathtaking version being played so many years after it had been composed. So hats off to the Japanese-born violinist and erhu player, Meg Okura, for conjuring up that version. As wave after wave of the song's melody unfolds like repeated sighs that send shivers of emotion down the spine, Okura's violin does the reverse, soaring like it has caught the draft of a hot air thermal and, like the proverbial bird, it now disappears, as if into the azure. While "Naima" does provide a taste of the beautiful music to come, it does not even begin to describe its extent and the intensity with which it is played on Naima, from Okura and her Pan Asian Jazz Ensemble.

Okura is an accomplished violinist, with flawless technique like that of a long line of European virtuosos including Stephane Grappelli, Jean-Luc Ponty, Didier Lockwood and the British violinists Nigel Kennedy and Chris Garrick. Her sensibility tends more towards the European style, which is dryer than the American—especially the jazz artists—and she improvises like a magically wrought cadenza, rather than the hot-blooded improvisations of say Billy Bang. But she is sharp, plays with a great deal of expression and carries the flutes of Anne Drummond and Jun Kubo like blithe spirits, melding their woody sounds with the brazenly airy glissandos of her violin. Okura's playing is full of exquisite loops and skids that seem to carry her from one plane to another. Her sharp gliding action is so ethereal that often she appears to come out of another dimension to rejoin the music of this one.

Naima is a process that inevitably leads to the magisterial suite, "The Lu Chai Suite," which was inspired by the 8th Century Tang Dynasty poet, Wang Wei, a revered artist in ancient China. As the composer informs via the liner notes, the poem has four lines, each incorporating five characters. Okura's suite follows this format, with each section or movement composed to match the structure of the poem. The first movement, "Empty Mountain," veers from the forbidden to the blissfully peaceful, especially during Okura's erhu solo. This instrument, and Satoshi Takeishi's percussion, gives the music an Oriental flavor, although at the best of times the music incorporates more American folk themes than anything else. The suite is complex, and is written in part using the Phrygian scale, obviating the necessity of the third and seventh notes. Finally in the third and most exciting movement "Sunlight," Okura takes inspiration from the Romantics including Robert Schumann, Anton Dvorak and Claude Debussy.

With this album, Meg Okura has established herself as a complete artist and a major one at that, who is unafraid to experiment and weave many musical worlds into one, using a gentle, all encompassing sensibility.