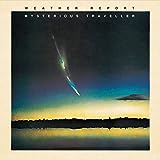 In 1974, three years after the band's inception, Weather Report became one of the world's most popular jazz groups due to their uncompromising originality and musicianship. This was the year that founding member Miroslav Vitous was replaced by Alphonso Johnson, who became a critical asset as both a fluid, creative bassist and a composer. Drummer Ishmael Wilburn and Brazilian percussionist Dom Um Romao, with a shifting cast of supporting players, laid the foundation for the band's most exciting incarnation yet. The overdue reissue of Mysterious Traveller is a welcome acknowledgement of this mid-period lineup's importance in the evolution of fusion.

This album contains some of the Report's most popular works, chiefly the long opener "Nubian Sundance." The sound of cheering crowds (apparently tacked on in the studio to simulate a live performance) still seems a bit presumptuous today, but the overall performance is certainly worth cheering. Zawinul's weirdly nonsensical vocals seem a precursor to Pat Metheny's wordless singing, and they add a witty flavor to the tune. "Cucumber Slumber" is another perennial favorite which gives Johnson the chance to work out the funk via slides and double-stops. The skulking title track brings much fun as well, with Shorter squeaking out alarums in the alley. The bass and sax take a coffee break on "Jungle Book," leaving Zawinul with two percussionists to carve out an inarguable masterpiece. His ability to program the synthesizers to suit his vision was always key to the WR sound, and this track was the ultimate realization of his artistry.

The disc is admittedly uneven at times, a risk run by any ensemble that chews at boundaries as much as the Report. "American Tango," for example, is rather inconsequential in the big picture despite its interesting textures. It's an ironic farewell for Vitous as his bandmates had bigger fish to fry. "Scarlet Woman" is disconcerting on the first few listens, as Shorter and Zawinul cough out sinuous lines sporadically over a net of near-silence. On the other hand, the sax/piano duet "Blackthorn Rose" is both gorgeous and rejuvenating as a change of pace from the electronic effluvium.

Zawinul's motto for the group was "We always solo, we never solo." The special combination of freedom and composition that Weather Report consistently achieved on record amply testifies to that philosophy, and Mysterious Traveller is a quintessential piece of evidence.