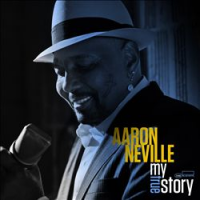 Singer Aaron Neville cut his teeth on doo-wop—a prominent sound of black urban American from the late 1940s through the start of the 1960s—as a teenager in New Orleans. Fashions change, and Neville went on to make his name in funk and soul. In 1985, he made a brief doo-wop touchdown with the EP Orchid In The Storm, since rereleased on Hyena Records. On My True Story, Neville's Blue Note debut, co-produced by label president Don Was and The Rolling Stones guitarist Keith Richards, the singer revisits another dozen doo-wop and doo-wop-related classics.

It is a jewel of an album.

Though Neville brings his own ism to the music, Was and Richards' production stays close to doo-wop's original template. The vocals are the thing and the instrumental arrangements simple and uncluttered, though there are some lovely little details to be found. Neville's intimate, vulnerable, affecting, high tenor is accompanied by a superb vocal backup group which includes first-generation doo-wop stylists. Richards' brief solo on the opening "Money Honey" is one of very few instrumental-only passages.

Then there are the songs: three-minute miniature masterpieces of joy and angst by writers such as Curtis Mayfield ("Gypsy Woman"), Jerry Leiber and Michael Stoller ("Ruby Baby"), Eugene Pitt and Oscar Waltzer ("My True Story"), Doc Pomus and Mort Shuman (the medley "This Magic Moment"/"True Love"), and Jesse A. Stone ("Money Honey").

A commitment to "authenticity" was at the root of Blue Note founder Alfred Lion's mission statement when he started the company in 1939. This album is a winning example of Was' intention to extend the label's remit beyond jazz while remaining true to that commitment. It is the real thing.

Money Honey; My True Story; Ruby Baby; Gypsy Woman; Ting A Ling; Be My Baby; Little Bitty Pretty One; Tears On My Pillow; Under The Boardwalk; Work With Me Annie; This Magic Moment/True Love; Goodnight My Love (Pleasant Dreams).