US4: My Scandinavian Blues: A Tribute To Horace Parlan

BY CHRIS MOSEY
November 8, 2016
Sign in to view read count 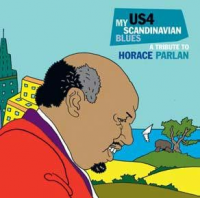 In the year of his birth Horace Parlan suffered an attack of polio that left him with a partially crippled right hand. He developed his own style of playing (involving a percussive left hand) and went on to become one of the most prolific and soulful pianists of the hard bop era. He played for two years with Charles Mingus and made eight Blue Note albums under his own name.

In 1972, at the age of 42, he left the US for Denmark. Looking back, he explained, "New York had become a hard place and impossible for musicians. Everyone was stressed. I was attacked on the street twice. It all seemed so futile."

In Copenhagen, he re-launched his career with highly acclaimed albums for Steeplechase, including two duet sessions with Archie Shepp. On the local scene he became something of a guru for younger musicians.

Five of those younger musicians got together to repay the debt they owe Horace Parlan with this tribute album of his compositions. At the age of 85, crippled and almost blind, Parlan helped out by selecting the numbers they should play.

He seemed happy with the result. "I'm extremely satisfied with what this quartet got out of my old tunes. It's really fun to hear them again after so many years."

But you can't help wondering about the purpose of the project for, to be honest, nothing measures up to Parlan's own earlier work. Oh, it's served up brimful with respect and admiration and that makes up for a lot, but still...

Now and then you hear echoes of the old days, as on "Heading South," which opens the DVD and is also included on the CD, but pianist Thomas Clausen doesn't have Parlan's feeling for the blues and is far more at home on relaxed ballads such as "One For Wilton" and "Opus 16A," both of which also feature some fine bass playing by Jimmi Roger Pedersen.

Singer Sinne Eeg makes a good fist of "Norma," written by Parlan for his Danish wife of 30 years. It's been given lyrics by British writer Susie Scraigg. On the DVD Eeg's efforts are undermined by some rather silly filming.

Throughout the DVD there are shots of Parlan being taken for a walk by the sea in his wheelchair or listening on headphones, but he's largely incidental to his own music. It's not until the last number, "Broken Promises," that he is permitted to talk. Asked how he felt about having to stop playing, he's philosophical, says his health came first.

Then he adds, "I'm happy as long as I can hear music. For me that's life, that's living." Maybe this is the purpose of the project: to give Horace Parlan something to listen to in his nursing home. If so, that's surely OK. Let's hope he likes what he hears.