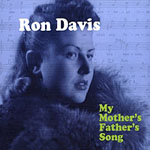 Digging deep into a family's history and heritage can reveal a goldmine of inspirational nuggets. This is exactly what Toronto-based pianist Ron Davis set out to do in his first all-trio recording, My Mother's Father's Song. His music has always drawn on the classical, swing and post-bop traditions of Art Tatum and Thelonious Monk. In this case there is also a strong embrace of his Polish heritage.

My Mother's Father's Song is a very poignant and personal project, especially as it relates to the title, associated with a lyrical "Bal u Grubego Joska" ("Party at Fat Joe's"). Davis' maternal grandfather, Joseph Ladowsky (Fat Joe), wrote it during pre-World War II Warsaw, where he owned a popular restaurant at the time.

Ron Davis never met his grandfather, and this reconnection is the moving backdrop to My Mother's Father's Song. Davis presents three versions of the tune—one each for solo bass, solo piano, and the full trio. Written in a slow 3/4, the song's refrain mentions an accordion and really captures the essence of what a folksy party must have been like during that specific period in Warsaw's history.

Such quiet but deeply melodic and tonal sounds—possessing that typical French movie flavor—are very much in evidence in the original "Danza Daniela." Staying in that French mood, Davis brings in an easy swinging, 4/4 rendition of "La Mer" by Charles Trenet, one of the most prolific French singers and songwriters of the 20th century.

The pianist also draws on different yet contextually linked pieces such as Coldplay's "Viva la Vida," Arlen and Mercer's "My Shining Hour," and James Taylor's "Don't Let Me Be Lonely Tonight," providing the right balance by breaking up the texture slightly with his "Tumba Ron Rumba." Nevertheless, the closing piano lament plays the anchoring melody of the project for one final melancholic musical thought.

Fat Joe would have been proud.