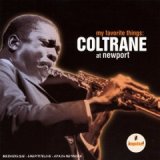 Complete recordings of saxophonist John Coltrane's 1963 and 1965 Newport Festival appearances, most of the material on My Favorite Things: Coltrane Live At Newport has been available before. Most, but crucially, not all—the disc includes some eight minutes of previously unreleased music. When you're talking about the incandescent Coltrane quartet of the mid 1960s, that's a serious chunk of time, more like eight light years to hardcore enthusiasts.

The new material forms what is now the first third of "Impressions." It starts with a theme statement from Coltrane, on soprano, a six minute solo from pianist McCoy Tyner, and a brief extract from a solo by bassist Jimmy Garrison. Coltrane sets up the tune before Tyner takes it away for a forceful, dervish-like work-out, his two-fisted block chords framing percussive, rapid-fire single note runs concentrated at the treble end of the keyboard. It's a formidable improvisation by the pianist, and why it was left off previous releases is a mystery.

Garrison's abbreviated solo follows. The rumbling distortion on his bottom string is so bad that the entire solo was excised from previous releases, and the excerpt included here is presumably the only passage which could be rendered listenable even with the latest digital technology. The track then takes up where the edited version on Newport '63 starts, with Coltrane, now on tenor, engaging in a fierce extended dialogue with drummer Roy Haynes (who was subbing for the quartet's regular drummer, Elvin Jones, laid up during the 1963 festival with a bad case of heroin addiction).

The mixes are new too. While avoiding radical recalibrations of the balance between the instruments, they're substantially crisper and more resonant than on previous packagings: Newport '63 (Impulse!/GRP, 1993) and New Thing At Newport (Impulse!, 2000). In particular, the audio quality of first three tracks, from 1963, is mightily improved.

Putting these two Newport appearances together on one disc serves, by the by, as a graphic illustration of Coltrane's journey towards the sonic extremes of his final few years—from da bomb that was Ascension (Impulse!, 1965), recorded only a week earlier than the second Newport set, until the his death in 1967. Even allowing for the presence of two massively different drummers—the turbulent Jones and the more measured Haynes—the shift in Coltrane's aesthetic is profound. The two versions of the soprano showcase "My Favorite Things" bookmark the process, from the more or less conventional lyricism of the first, to the freer, more abrasive tonalities entering the second. We know the story already, of course, but hearing these two tracks practically back-to-back certainly emphasizes it.

Factor in the new mixes, and My Favorite Things: Coltrane Live At Newport is far from being "just" another Coltrane re-master.