By EYAL HAREUVENI
November 25, 2012
Sign in to view read count 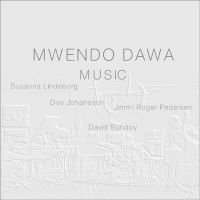 The Swedish quartet Mwendo Dawa (in Swahili: the way to a special goal) is co-led by keyboardist Susanna Lindeborg and reed player Ove Johansson, both also working as a duo and running the LJ Records label, which has operated since the late seventies and defined its own means of musical expression. Throughout the years, this quartet has hosted several well known Swedish musicians like bassists Anders Jormin and Lars Danielsson, as well as guitarist Ulf Wakenius.

The quartet has always mixed free improvised music on acoustic instruments—relying on a strong rhythmical approach—with electronic instruments before and laptops now, in order to enhance and expand its musical universe. This universe has open, inclusive borders—drawing inspiration from the sixties' fiery free jazz, the seventies' fusion experiences with synthesized sounds of Weather Report, contemporary music, avant-garde sonic searches and confident Nordic calm—but always seeks to challenge itself without becoming trapped in any orthodox means, or losing its soulful essence. Mwendo Dawa Music, the quartet's twentieth release, is another adventurous chapter in its musical journey.

The first six pieces were composed by Johansson and Lindberg and feature loose yet intense structures, cinematic in their mysterious spirit and possessed of a unifying narrative. "Near the Coast" boils patiently with its thickened electro-acoustic texture and shifting rhythmic patterns. Lindeborg's short contemplative solo piece, "Private room," follows, flowing organically into the dense and nuanced interplay of "Mwendo Music," the minimalistic "Small space," and culminating with the "Slow theme," featuring the quartet's restless, multilayered approach. The powerful rhythm section of Danish bassist Jimmi Roger Pedersen and Göteborg-based Norwegian drummer David Sundby, colors and solidifies the textures.

The other six pieces are more open-ended and intuitive group improvisations. The exchange of musical ideas on "Scribble" is faster, the interplay tighter and more muscular, and the use of electronic soundscapes reaches otherworldly terrains. Things subsequently melt down naturally into the spare, intriguing texture of "Harmonic disorder," gain momentum again on the stormy "Fretful Art," and blend into the minimalistic "Awaitening world," the sax-expressive searches of "Free point" and the powerful and eerie closer, "Chaos theorem."