In 1967, with percussionist Han Bennink and pianist Misha Mengelberg, he co-founded the Instant Composers Pool (ICP), with which he regularly performed until 1973. He was a member of the Globe Unity Orchestra and the Gunter Hampel Group.

In 1974 he began leading the 10-piece Willem Breuker Kollektief, which performed jazz in a theatrical and often unconventional manner, drawing elements from theater and vaudeville. With the group, he toured Western Europe, Russia, Australia, India, China, Japan, the United States, and Canada.

He was also known as an authority on the music of Kurt Weill. In 1997 he produced, with Carrie de Swaan, a 48-hour, 12-part radio documentary on the life of Weill entitled Componist Kurt Weill.

In 1974 he founded the record label BVHaast. Beginning in 1977, he organized the annual Klap op de Vuurpijl (Top It All) festival in Amsterdam. Haast Music Publishers, which he also operated, published his scores.

In 1998, Breuker was made a Knight of the Order of the Netherlands Lion. 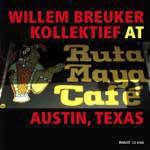 All About Jazz musician pages are maintained by musicians, publicists and trusted members like you. Interested? Tell us why you would like to improve the Willem Breuker musician page.