Vicente Amigo is considered both one of flamenco's best-selling and most innovative artists today. Somewhere between poetry and commercial stardom, he represents a new generation of flamenco artists.

Vicente Amigo appears to be enveloped by a charismatic and ethereal air, his gaze seemingly lost in the distance. His guitar constantly stimulates our imagination. This is music to dance to with the spirit... it is so powerful, it is lifted off the sheet music and propelled into space. It is exciting for the connoisseur, but also accessible to everyone. To his masterful and magical use of music we must add his personal charisma, which makes him irresistible on stage. He is a true sultan from Córdoba, and he is ready to conquer the world.

Born in the Spanish town of Guadalcanal near Seville in 1967, flamenco guitarist Vicente Amigo is hailed as the “new Paco de Lucia.” Quite a compliment for one so young! Yet, given his formidable talent for innovation and already prodigious career, the comparison seems far from outrageous. Living in Cordoba since the age of five, Vicente Amigo began studying guitar when still very young, and bought his first guitar when eight. At the city's renowned guitar academies, amongst which that of Merengue de Córdoba, he quickly became one of their most outstanding students.

His professional and recording career began as Manolo Sanlucar's apprentice, playing third guitar with the legendary guitarist from Cadiz. Later, he formed a duo with the flamenco singer (or cantaor) El Pele - together they released an album, “Poeta de Esquinas Blandas”, which in many ways opened up new formal avenues in contemporary flamenco. In 1989 he worked with the legendary Camarón de La Isla on the album “Soy Gitano”. That year he won the prestigious Ramón Montoya Award.

In 1991 he shared the stage with Paco de Lucia during the international guitar festival “Leyendas de la Guitarra” in Seville.That same year he also recorded his first solo album, “De Mi Corazón Al Aire,” which received much media acclaim. Soon after that, he performed the “Concierto Flamenco Para un Marinero en Tierra”, dedicated to the poet Rafael Alberti and orchestrated by the great composer Leo Brower.

In “Martinica 92” he shared the stage with Stanley Jordan, and this international collaboration lead him to work with artists such as Milton Nascimento, Wagner Tiso, Al Di Meola, Joáo Bosco and John McLaughlin. In 1995 he released “Vivencias Imaginadas,” his second album, which included a refined joint effort with Paco de Lucia, as a homage to Pat Metheny. Two years later in ’97, his album “Poeta” received the flamenco awards given by the “Premios de la Música” the Spanish Grammys equivalent. His career was unstoppable.

Although originally from Seville and raised in Córdoba, Amigo’s style of playing is above all influenced by that of Cadiz and defined by the highly original sound of his guitar, allowing him to penetrate its melody. The polyrhythmic elements of his work's percussive component call to mind the transformations undergone by Spanish popular music in Latin America and above all in Cuba. An inspired and sensitive accompanying “tocaor” for singers such as El Pele, Carmen Linares, Jose Merce and Remedios Amaya, Vicente Amigo is also a respected and enterprising composer.

He won the 2001 Latin Grammy Award for Flamenco for his record “Ciudad de Las Ideas.” This album, in which we can sense the loneliness of the creative process, captures Vicente's search for spontaneity - he doesn't want his listeners to guess the intricate musical processes behind his sound; instead, he renders his musical web invisible and invites us to immerse ourselves in pure feeling.

In May of 2009 Amigo released his sixth album “Paseo de Gracia.” The guitarist from Cordoba considers this work as “a cooperative album.” The record is new collection of songs sung by Rafael de Utrera and Miguel Ortega, with the percussions of Tino di Geraldo and Paquito González. The song 'Autorretrato' the rumba-tango 'Amor de nadie' the buler�-a 'Luz de la sombra' and the tangos 'La estrella' are some of the “songs understood from a flamenco point of view” with which Vicente Amigo widens and consolidates his music world. Show less 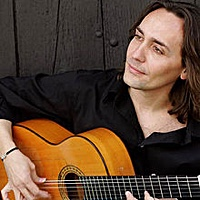 All About Jazz musician pages are maintained by musicians, publicists and trusted members like you. Interested? Tell us why you would like to improve the Vicente Amigo musician page.