Since Bilal Karaman was eleven years old, he put the guitar at the center of his life and he became one of the pioneering jazz guitarists in Turkey. Over the years, Bilal Karaman has done a lot of collaboration with international musicians and played together, such as Marcus Miller, Lars Danielson, Ricky Ford , Aydın Esen, Harvie S, Zakir Hussain, Fernando Paiva, Mike Moreno, Pierre Blanchard , Gustav Lundgren, Jarrod Cagwin and Dianne Reeves .

In 2012, he was named one of four rising guitarists of the year for an interview with Barry Cleveland in American Guitar Player . Karaman, who never leaves the quest for innovation, which is at the heart of jazz, has created a different musical world in every project. His great joy at live concerts was his hallmark. Bilal Karaman, who can easily hear this quest with four albums published with his unique guitar stamp, has released the first album of the series “Manouche a La Turca” , based on the French gypsy jazz, the genre Manouche created by Django Reinhardt these last years. The album, which successfully carried the European jazz-swing style on Anatolia, has continued with 2 more volumes.

Bilal Karaman, one of the best-known guitarists in Turkey, announced his new project called “Manouche a La Turca’ music from Turkey in a different format, with gypsy and jazz-swing styles that the French Django Reinhardt was the pioneer. In the 1930s, when American jazz influenced Europe, the music Manouche, created by the merger of Romano-gypsy French music, was transported to Anatolia nowadays with Bilal Karaman. This is why the series “Manouche a La Turca” is a pioneer in the history of Turkish music.’ Lu Records.

Guitarist Bilal Karaman is telling the story of Manouche a La Turca himself:

In Istanbul, some time in 1997 is when I first met jazz. People liken my solos and my style to Django Reinhardt . That’s how I first heard of Django’s name. I wasn’t mature enough to realize at what point Django was a great guitarist. And in those years, I didn’t really think it was a good idea to build my music on that genre until a jazz club in Istanbul asked me to do a special concert for Django’s 100th anniversary. At that concert, I wanted to play tunes from our land as well as known Manouche standards, and I finally composed something and took it into our repertoire. That’s how Manouche a La Turca started in 2010. I passed a long time to understand and get to know this genre (very difficult journey from modern electric guitar to acoustic traditional guitar) because there was not much people who was playing Manouche except me in Turkey those years. At the same time I was studying longa and sirtos to consolidate the repertoire. I wanted to get the magnificent harmony between Gypsy Swing (Manouche) school and Anatolian music .

Eventually, I felt ready and started to record first demos in 2014. We started to record for the album in the summer of 2016; unfortunately due to difficulties and misfortunes in the country where I live, we were able to finish the album by the end of 2017. Since there is not an example of the music that is in my mind, it took me a long time to decide with which musicians should I play. At last, I decided Göksun Çavdar for clarinet, Pierre Blanchard and Hüseyin Kemancı for violin and Baran Say for double bass. I was playing all guitars. In our repertoire, there were composers like Tanburi Cemil Bey and Kemani Kevser Hanım who were dominate in both western and in Turkish music and we were playing their classical works. In the second album of the series, I arranged the works of valuable composers Mehmet Ilgın and Sadi Işılay. Semih Çelikel and Hüseyin Kemancı are on violins and Baran Say is on contrabass. In the third album of the series is a live compilation from our concerts between 2018-2020. Show less 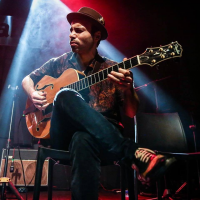 All About Jazz musician pages are maintained by musicians, publicists and trusted members like you. Interested? Tell us why you would like to improve the Bilal Karaman musician page.