After 20 years of making music together as husband-and-wife jazz duo Tuck & Patti, Tuck Andress's guitar and Patti Cathcart's vocals blend smoothly into a honed sound all their own. They perform both their own compositions, such as "High Heel Blues," and standards like "One Hand, One Heart" from West Side Story and Stevie Wonder's "I Wish." Each concert ends with their signature closer, "You Take My Breath Away."

Andress was raised in Oklahoma. He studied piano and took up guitar as a young teenager, when he was eager to play in a neighborhood garage band. He studied for a few months with Tommy Crook, but was primarily a self-taught artist who learned by playing with other musicians, listening to records, and experimenting. He enrolled in Stanford University in 1970, but dropped out after the first quarter to join members of his high school band in Los Angeles. Andress found a session gig on his first day in town, and was later offered work on the popular Sonny and Cher Comedy Hour. Soon, however, he found Los Angeles too commercial, and he went back to Stanford, where he majored in music, studying classical guitar and playing with the Gap Band, Chaka Kahn, and Leon Russell.

Meanwhile, Cathcart, who was born and raised in San Francisco, spent eleven years studying the violin. She also sang in and directed choirs, but learned about phrasing and scatting by listening to Sammy Davis, Jr. She studied opera in college, then began singing with rock 'n' rollers in her twenties, including Bob Weir's Kingfish band, Shaky Ground, and Occam's Razor.

Tuck & Patti, who met in San Francisco in 1978 while auditioning for a Las Vegas-style show band, had an immediate connection, claiming in the December 7, 1988, edition of the Boston Globe that theirs was love at first sight: "'Each of us had an idea for a special, distinctive sound after absorbing all those influences,' said Tuck. Patti chimed in, 'And I've been quoted before, accurately, that I am a product of everything I've ever heard, although I'd put Mahalia Jackson and Ella Fitzgerald first and foremost. But the point is when we met, we each knew we'd found the perfect musical partner to explore with.'" Before long they began working as a duo, playing in small Bay Area clubs. They were married in 1981, after a trip to India, where Tuck, a follower of Maher Baba, made a pilgrimage to the guru's grave. On the way back, he proposed in Paris.

Over the next few years, they continued to play in clubs. They received several record label offers, but each one came with unnecessary---and in their opinion, unacceptable--- conditions, such as adding background singers or more instruments. In 1988, however, they signed with Windham Hill after the label made them an offer they liked. They released Tears of Joy that same year, an album whose cover promised "no overdubbing, punching in or editing." The Boston Globe called it "[d]aring in its simplicity---just the two of them, performing in real time in a home studio with no overdubs, synthesized arrangements or stacks of backing tracks---the album is crafted like crystal, shining through today's overproduced soundscape like a full moon through a partly-cloudy sky."

Their next album, Love Warriors, released the following year, won a San Francisco Bay Area Music Award for Best Jazz Album. Dream was released in 1989, and by that time, they were ready to move on to another label. Learning How to Fly was released in 1994 by Epic. "When it's time to go, it's time to go," Cathcart told Billboard in 1995. "And we'd been feeling that increasingly. Epic was one of the few labels I knew of that was still willing to work a record a year after it came out. We knew we needed that kind of commitment to help us try to move to a next step, especially doing what we're doing."

For their next albums, however, they returned to Windham Hill, releasing Best of Tuck & Patti in 1997 and Paradise Found in 1998, the first of their albums to incorporate background singers and backup musicians. The couple, who frequently experimented with concepts and ideas---even onstage---viewed returning to Windham Hill as an opportunity to learn. "We knew in the first 30 seconds after we'd laid eyes on each other that we were going to play music together for a long time," Cathcart told Billboard. "So early on we decided if somebody blows it or makes a mistake, there's not going to be a value judgment because if you're not free to jump off the cliff and crash and burn, then you're not free to soar. I don't care if it's on the biggest show in the whole world, and you decide to improvise. If the muse takes you there, we're going. I'll meet you at the end."

On Taking the Long Way Home, released in 2001, they returned to their duo-only style, devoting the album exclusively to original music. "Patti is the group's arranger," Tuck told Guitar Player. "People assume I write the music and Patti writes the lyrics and melody, but I'm not a songwriter.... She hears orchestrally," Andress continued. "She sings parts to me. She'll say, 'All right, we need a harmonic chord slapped right here.' ... My role is to figure out what she's hearing and come up with a way to execute it."

While their comforting, upbeat music may not indicate it, Tuck & Patti are very aware of the business side of a recording career and feel a responsibility to take care of the gift they have been given. "To me, that's where the business thing come in," Andress told Billboard. "I don't really want to analyze all the deals, and in some ways I'd just as soon not bother. But we feel a responsibility. We've been entrusted with this thing, loaned this thing for the lifetime that we do this. It's like somebody said, "Here, take care of this for me. You're going sing, play together, and go out and try to make people happy with it, and do the best you can with it.' We're the curators of this gift." They try to play music that has a positive message that speaks from the heart, and they keep that in mind as they make business decisions.

In 2002 they left Windham Hill again, this time launching their own label, T&P Records. Chocolate Moment, released that same year, is an album of haunting and delicate original pieces written after the tragic events of September 11, 2001. "This whole CD, every part of it, is connected to that," Patti said on the couple's website. "We were going through all these feelings at the same time: anger, disbelief, wanting to get into bed and pull the covers up."

Tuck & Patti appreciate what they have and feel very fortunate to have found their music and each other. "We're stunned that it just goes deeper and deeper and gets better and better," Andress told the Boston Herald. "So increasingly, the theme that goes all through our lives is one of gratitude. It didn't have to be this good. That doesn't mean that life isn't challenging et cetera, et cetera. But it doesn't have to be this good."

Tuck Andress guitar, electric
Probably best known as half of the guitar/vocal duo, Tuck And Patti, Andress's music is a blend of jazz, funk, R&B, and blues. His incredible technique enables him to sound like three guitarists playing simultaneously.
~ Paul Kohler, Rovi 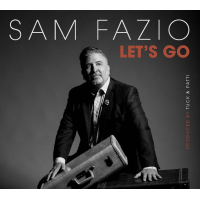 All About Jazz musician pages are maintained by musicians, publicists and trusted members like you. Interested? Tell us why you would like to improve the Tuck Andress musician page.