She is quite simply, one of a kind, a phenomenon of sorts in the world of soul music. For an amazing twenty-five years - since her Motown debut "Wild And Peaceful" - hit the streets, Teena Marie has been delivering her own brand of classic R&B to a loyal, steadfast (and primarily black) audience.

Even though she hasn't had a new release since her "Passion Play" on her own Sarai label in 1994, Teena hasn't stopped working, touring constantly and offering those die-hard fans the kind of hardcore, intense emotionally-driven vocalizing that has made her a serious fixture on the music scene.

Over the years, I've had the chance to interview Teena a number of times either for "Blues & Soul," "Billboard" or to update her record company bio when she was with Epic Records in the 80s and early 90s. Each time, I'm left with realizing that this lady lives and loves music - for real. Our conversations are inevitably ˜deep,' referencing matters spiritual but always, we get back to music and on one occasion, I was fortunate to speak with Teena at her home where she has a studio. I was literally blown away because she was rehearsing that day and watching her walk calmly over to the mike and then give a completely passionate performance in the confines of her own home was a memory I will never forget...

Thus, the opportunity to speak with Lady T., as she is affectionately know, is always very welcome. We started out talking about what Teena was up to between the last album and this. "I was raising my daughter, I was on the road a lot and honestly, R&B was in a funk for a while. There was resurgence of new artists like Alicia Keys, Musiq, India Arie...but I didn't want to put out a record until I was ready so I stayed on the road and took that direction with my career," Teena reveals. "Fortunately, I don't have to have a record out to work so I was recording when I felt like it. It's a wonderful life because I can still tour and perform..."

Teena has - as she noted - toured and worked consistently. I ask how she has been able to sustain herself that way when so many others are dependent on having product in the marketplace. "Honestly? It's because my live show is really good!" she laughs. "it's my whole life. I've been onstage since I was eight and it's where I'm most comfortable. People ˜feel' me and they feel my spirit and I'm still really passionate about the music," Teena notes. "And black audiences really love that I do a good show. You know I've loved black music since I was born and I feel like God put me here to unite people. I've always sung what's in my heart and it's never been about wanting to â€˜cross over'. I never sat down and said let me write something that will be a crossover hit. The most beautiful blessing God gave me was to have this relationship with black people and black music..."

Teena isn't seen on television that often but when she is, she inevitably turns in an amazing performance and a tribute to Aretha Franklin that aired on BET last year was a case in point and a memorable experience for the Santa Monica-born native. "I remember growing up with her "Live At Fillmore West" album and rather than being outside playing with the other kids, I was home wearing that album out! Being on a show that was a tribute to her...wow. She was out in the audience and she picked who she wanted to do the finale with. I was onstage and Alicia Keys was up there and she didn't have a mike so I gave her mine. Well, then Aretha turned to me and said, â€˜here's my mike'! That was such a beautiful full circle for me - really just soulful camaraderie..."

Mention of camaraderie naturally brings up the name of Rick James who has been a part of Teena's life from the time she signed with Motown in 1975; as music buffs will recall, after four years of working with various in-house producers, Teena was finally taken under Rick's wing and the result was her first hit album, the aforementioned "Wild And Peaceful." Rick is featured on the track "I Got You" on Teena's new album and the pair have been touring together for a few months. " It's so exciting," Teena says. "We have one band and we come out on the song "DÃ©jÃ Vu" (the classic track from "Wild & Peaceful") and we give the people two hours of non-stop music." Teena adds that "Rick stopped working for a while because he had health problems but with every show, he gets stronger and stronger and I can see that old magical gleam in his eye..." 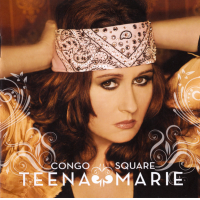 All About Jazz musician pages are maintained by musicians, publicists and trusted members like you. Interested? Tell us why you would like to improve the Teena Marie musician page.