PJ Parker has performed in concerts, dinner theater, summer stock, regional theater and musical revues, and has also been the featured vocalist with orchestras and bands from Atlantic City to New York City.

She has been an opening band featured vocalist for John Pizzarelli and Harry Connick Jr., as well as the featured female vocalist in Trump Plaza's big band show, "Your Seaside Ballroom," also appearing in Philadelphia's Variety Club Telethon.

WICR, University of Indianapolis' Jazz station, listed "Dreams Are Meant For Two" in its Top 30 list every week from Sept. 8 through Oct. 27.

New Christmas Music From PJ Parker to Benefit Humane Society of the...

More Accolades for PJ Parker's "Dreams Are Meant for Two"

Jazz Vocalist and Songwriter PJ Parker's "Not Beneath the Tree" Awarded...

More Praise for PJ Parker's "Dreams Are Meant for Two" - From France...

JazzPolice.com: Dreams Are Meant For Two 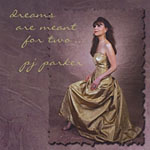 Dreams Are Meant for...

All About Jazz musician pages are maintained by musicians, publicists and trusted members like you. Interested? Tell us why you would like to improve the PJ Parker musician page.