In a jazz marketplace saturated with singer/pianists, Patti Wicks stands apart. She is the real thing - a pianist with a highly personal style of playing and a singer with an instantly recognizable voice. Her superior musicianship, impeccable taste and singular ability to dig deep inside the meaning of a lyric have earned her the respect of her fellow jazz musicians, the unqualified praise of jazz critics, and the admiration of a constantly expanding audience of devoted fans. Despite the inherent difficulties of a career in jazz, Wicks has remained steadfast in her commitment to the music and in her determination to find success on her own terms.

Patti Wicks learned to overcome challenges at a very early age. The former Patricia Ellen Chappell was born two months premature, a medical crisis that left her visually impaired. Fortunately, her hearing more than compensated for her limited eyesight. At the age of three, Patti sat listening to her mother play the piano. She then walked over to the piano and played note for note the song her mother had just finished. Her stunned parents realized that Patti had a special gift and decided to find her a piano teacher. However, all the teachers they spoke with had the same question - How do you teach the piano to a three-year-old who can't see the sheet music? It wasn't until Patti's parents met Pat Kleinmeyer that a they found a solution. A Julliard graduate, Kleinmeyer developed an innovative teaching method that would allow Patti to learn to play the piano by ear. In addition to the traditional classical piano training, she also encouraged Patti's natural interest in composing and improvising and taught her basic music theory.

Patti developed her passion for jazz while attending the Crane School of Music at SUNY Potsdam. At Crane, Patti studied with James Ball, an accomplished classical and jazz pianist. He introduced her to the music of many jazz greats, including pianist Bill Evans who would have a major influence on Patti's style as a jazz pianist. She quickly immersed herself in the music, listening to jazz recordings, playing at jam sessions and playing week-end gigs at clubs. By the time she graduated college she was ready to embark on a career as a professional jazz musician.

Over the next thirty years, Patti Wicks honed her craft playing New York City jazz clubs as well as clubs and concerts up and down the East Coast jazz circuit from Maine to Florida. Her trio featured a variety of musicians including bassists Sam Jones, Richard Davis, Brian Torff and Mark Dresser, and drummers Curtis Boyd, Louis Hayes, Mickey Roker and Alan Dawson. In addition to her work as a leader, Wicks has played with many jazz luminaries, among them Flip Phillips, Clark Terry, Cecil Payne, Frank Morgan, Ira Sullivan, Pete Minger, Richie Cole, Larry Coryell and Turk Mauro. She has also accompanied jazz vocalists Anita O'Day, Sheila Jordan, Carol Sloane, Rebecca Parris, Roseanna Vitro and Giacomo Gates. Throughout her career Patti has also been actively involved in jazz education teaching jazz piano at the college level, as well as working as a private vocal coach and jazz piano instructor.

In 1999, Wicks recorded the commercial for Wyndham International Hotels and Resorts, playing and singing "They Can't Take That Away From Me". It was aired for two years on television and radio stations worldwide.

With the release of her second CD project in 2003, "Love Locked Out" on the MAXJAZZ label, Wicks has finally moved out onto the international jazz stage.

Produced by Joel E. Siegel and featuring bassist Keter Betts and drummer Joe LaBarbera, "Love Locked Out" is a gripping all-ballad album in the tradition of Carmen McRae's "Bittersweet" and Irene Kral's "Where Is Love?". The CD received rave reviews in JazzTimes, Cadence Magazine, All About Jazz, Jazz Review and the All Music Guide. In reviewing the album for the Washington Post, jazz critic Mike Joyce observed, "If you were to listenclosely—very closely—in search of a shrill note or a needlessly ornamental vocal embellishment, or search even further for an emotionally shallow interpretation or a run-of-the-mill lyric, you'd come up empty-handed every time."

Since the release of "Love Locked Out," Wicks has performed at major international jazz clubs from the Blue Note in Milan to Blues Alley in Washington, D.C. She also played at several jazz festivals including the Cape May Jazz Festival, the Anguilla Jazz Festival in the British West Indies, Syracuse Festival: Jazz In The Square, and the Livorno and La Spezia Jazz Festival in Italy.

Patti returned to Italy in July and December, 2004 with concerts in Florence, Saluzzo, Rome and Genoa. A new CD, produced by Massimo Visentin on the Jazz Guests label, was recorded in July. "Basic Feeling" features Patti and Claudio Chiara on alto sax, as part of the JazzMates Quartet, with bassist Giovanni Sanguineti and drummer Giovanni Gullino. Distributed by EGEA Records, the CD was released in Italy on January 10, 2005, receiving rave reviews from both US and international jazz critics.

“From the first notes she strikes you know that you are listening to an excellent pianist. Her singing voice is mature and unforced, bringing subtlety and nuance to her interpretations of a song selection that avoids overdone material…..It is very clear to understand why Wicks has attracted respect and attention.” — Bruce Crowther, JazzJournal International

“...A wicked ballad performer like her friends Rebecca Parris and Nancy King, Wicks’ voice and time can add an additional dimension to any song she sings……She makes Fisher and Segal’s “I Keep Going back to Joe’s” her “saloon” song in the same way Sinatra did with “One For My Baby.”…..Wicks’ piano and voice blends the smoky and the heady in a solution of relaxed bliss….[her] talent cannot be contained..." and shouldn’t be.”- C.Michael Bailey, All About Jazz-2/07

Highlights of 2007 included her May tour of Italy; the November 2007 release of her 5th CD, “It’s A Good Day”, (her third recording with her Italian rhythm section), and the late November promotional tour in Italy following Patti’s performance on the Jazz Cruise 2007.

With her commitment to jazz and her integrity as an artist, Patti is driven by her love of this music and the desire to share it—whether in an intimate jazz club, on a concert stage, or with her students. As guitarist Joe Beck has said: “This is the real deal... People like her have to exist for jazz, as we know it, to exist.”

A Quick Chat with Patti Wicks

Patti Wicks Returns to Italy for May Tour

Patti Wicks Performs At The Metropolitan Room at Gotham, 6/15/06

Patti Wicks Trio performing at The Jazz Standard in NYC

"Like the much-missed Carmen McRae, Ms. Wicks...scrutinizes songs with a raised eyebrow. Words and phrases are dismantled with a wry deliberation and an improvisatory boldness..." — Stephen Holden, NY Times

"It should be noted that Patti has the rare ability to excel as a singer, And as an instrumentalist, which talents place her in a very select category." —Mort Fega

"Patti Wicks is an exquisite singer-pianist whose MAXJAZZ release Love Locked Out is one of the finest ballad albums in recent times." — Scott Yanow

It's a Good Day

It's A Good Day

Two for the Roads 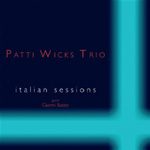 All About Jazz musician pages are maintained by musicians, publicists and trusted members like you. Interested? Tell us why you would like to improve the Patti Wicks musician page.